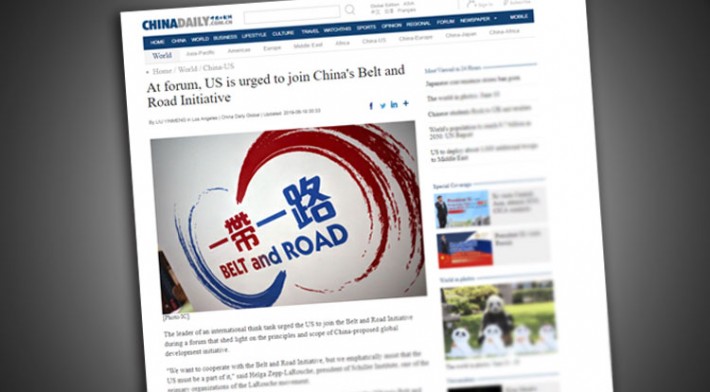 Helga Zepp-LaRouche, president of the Schiller Institute international think tank, “urged the U.S. to join the Belt and Road Initiative during a forum that shed light on the principles and scope of China-proposed global development initiative,” China Daily, the national English-language newspaper, reported Tuesday.

China Daily cited Zepp-LaRouche’s videotaped message to the forum held by the Schiller Institute and the P.R.C. Consulate in Glendale two days ago, on the subject of  “China’s Belt and Road Initiative — A Historic Opportunity for the U.S.A.”

“`We want to cooperate with the Belt and Road Initiative, but we emphatically insist that the U.S. must be a part of it,’ Zepp-LaRouche told the forum, which was attended by diplomats from China, Belgium and Kenya, as well as representatives of local government,” the paper reported.

“Zepp-LaRouche praised China’s reform and opening-up efforts, which she said has not only transformed China economically, but also allowed China to help other developing countries overcome underdevelopment and poverty. ‘Now, the West should not be upset about it, because they could have done the same thing. Why didn’t the U.S. and Europe develop Africa, Latin America, and most of the Asian countries?’ she asked.”

Notably, China Daily reported that in his presentation on the BRI to the forum, China’s Deputy Consul General in Los Angeles Shi Yuanqiang said that while the U.S. government did not send any representatives to the Second Belt and Road Forum for International Cooperation this year, U.S. Embassy representatives did attend, and “in fact, the U.S. had the largest group of delegates among all the countries at the second forum.”