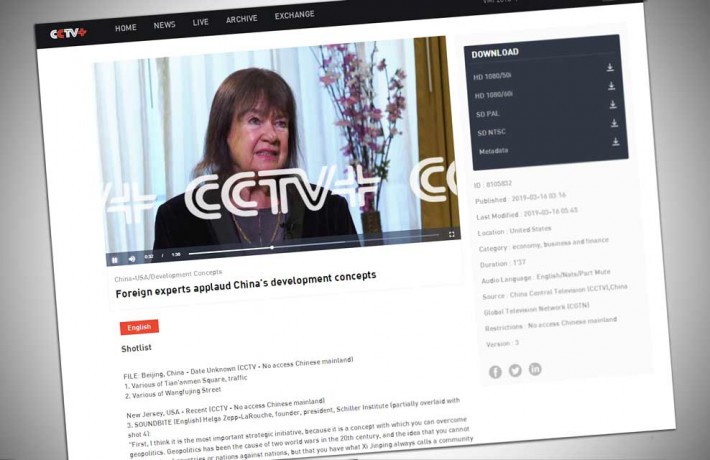 Interviews with Helga Zepp-LaRouche and Jacques Cheminade appeared on a newscast by CCTV-13 reporting on U.S. reactions to the just-concluded National People’s Congress. CCTV journalist Wang Guang reported on the reaction of U.S. think tanks to the ideas presented during the Two Sessions with regard to U.S.-China trade and the Belt and Road Initiative.

The broadcast then shifted to an interview done with Helga at the Morristown Schiller Institute conference. Zepp-LaRouche said:

“I personally think it is the most important strategic initiative, because it is a concept with which you can overcome geopolitics. Geopolitics has been the cause of two wars in the 20th Century, and the idea that you can not have blocs of countries or nations against nations, but that you have what Xi Jinping always calls the ‘community of the shared future of humanity,’ that you put the one humanity first, is a strategic concept which allows you to overcome the divisions which existed in previous centuries.”

This was followed by Cheminade, who said,