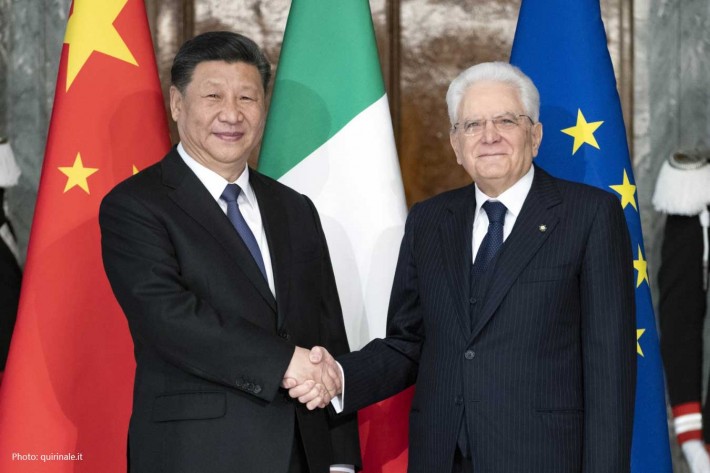 Italy and China have signed the famous Memorandum of Understanding on Belt and Road cooperation Friday, together with 10 economic agreements and 18 institutional agreements (19 with the BRI MOU). The MOU is a milestone and is said to already be being studied by other countries that want to follow Italy.

The MOU says at the outset that

“The Parties will work together within the Belt and Road Initiative (BRI) to translate mutual complementary strengths into advantages for practical cooperation and sustainable growth, supporting synergies between the Belt and Road Initiative and priorities identified in the Investment Plan for Europe and the Trans-European Networks, bearing in mind discussions in the EU China Connectivity Platform.”

With the MOU, Italy is the first large industrial economy to join the Belt and Road, as Chinese media proudly stress. The signature of the MOU occurred in spite of trans-Atlantic pressures and open hostility by Italy’s “partners” in the EU. Italian Minister for Economic Development Luigi Di Maio, who signed the MOU together with his counterpart He Lifeng, chairman of the National Development and Reform Commission, stated that

“today is for us a very important day, in which the Made in Italy is winning, Italian firms are winning. We made a step to help our economy to grow. Italy came first with China.”

The economic agreements include: a strategic partnership between the Italian Cassa Depositi e Prestiti and the Bank of China to finance Italian firms in China; a MOU between the Italian oil company ENI and the Bank of China for explorations in China; Ansaldo Energia signed two agreements, one to develop gas turbines with UGTC and another one for the supply of a turbine to Shanghai Electric and Benxi Steel; the Port Authorities of Trieste and Genoa signed an agreement with the construction giant CCCC. Cassa Depositi and the natural gas utility Snam signed a deal with the Silk Road Fund for investments along the Silk Road; the Institute for Foreign Trade signed a deal with Suning to create a platform to promote Italian lifestyle in China; and the Danieli group signed a contract with China Camc Engineering for the construction of a steel plant in Azerbaijan.

The institutional agreements, besides the MOU on the BRI cooperation, include cooperation on innovative startups and electronic trade, as well as cooperation between the two space agencies, agriculture and culture, health and media.

Italian President Sergio Mattarella told the business leaders that, once again, there is a “culture of growth.” He said, “we can have confidence in both countries” that there will be development. The Memorandum of Understanding has been worked on since last September, and the cooperation between Italy and China will not only facilitate our own development, but will “enable global growth.” He said that ‘the globalized world needs more consultations” between nations, in all areas, especially trade, space and culture.

In an interview with Chinese journalists, Italian President Mattarella spoke at length about the ancient bonds between Italy and China and the future perspective for cooperation. This year marks the 15th anniversary of the comprehensive strategic partnership between the two countries, and this partnership is “built on solid foundations, inspired by natural convergences between two very ancient civilizations,” Mattarella was quoted by Xinhua.

Mattarella underscored the “growing and fruitful interaction between our peoples, who are so similar in terms of industriousness and creativity.”

Xi’s visit is an expression of the “solidity of the bond and the mutual respect” between Italy and China, he said.

After some lip service to transparency and openness, Mattarella said that on the cultural front, the heritage of both Italy and China “arouses admiration everywhere in the world,” and this heritage could be a great development driver. He referred to the mechanism of forging twinning relationships between the two countries’ World Heritage Sites.

Speaking of how the Italy-China partnership contributes to a better and more stable world, the President said that Italy is committed to safeguarding peace and rules-based multilateralism, and is pleased to see the two sides have consensus on that.

The Italian press agency ANSA reported that Mattarella expressed the wish that, with the visit of President Xi, “agreements, ideas, projects can come out, in which the Italian-Chinese partnership could develop further, including for a larger benefit of the collaboration between Europe and Asia, which needs an ever bigger volume of sustainable investments in infrastructure, to ensure a future of well-being and peace for all peoples of the two continents.”