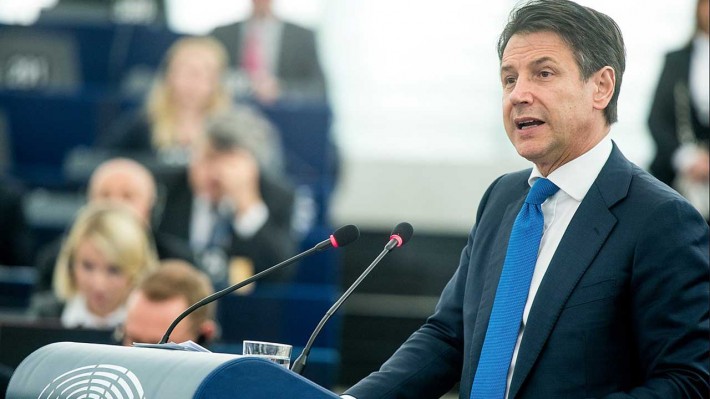 The Italian government has just announced it’s intention to sign a memorandum of understanding (MOU) to join the Belt and Road Initiative with China when President Xi Jinping visits Italy on March 22-23.  Italian Prime Minister Giuseppe Conte, speaking at an event in Genoa March 8th declared,

“The Silk Road, is a major project of infrastructural connectivity which offers a large availability by  China to promote a trade exchange and not only that. I believe that, with all necessary caution, this can be an opportunity, a chance for our country. It is an opportunity for our country system and for Europe in general.”

Conte also said he promised to attend to the second Belt and Road Forum on International Cooperation in Beijing at the end of April. As for their U.S. ally,

“we have explained that this is for us a choice of economic and trade relationships. The fact that we are comfortably in the Atlantic Alliance and in the European system does not prevent us from making economic and trade choices that allow us to have more opportunities.”

This wonderful news of international cooperation in major infrastructure projects, as well as joint projects in Africa, was greeted with absolute horror by the Financial Times, the voice of the City of London, and by Garrett Marquis, a member of the US National Security Council under John Bolton. The FT rants that China is building a “Trojan Horse” in Eastern and Central Europe to divide and undermine the EU, ordering Italy to cease and desist. The FT quotes Marquis that he and his neocon associates believe the BRI to be “made in China, for China,” and that it will not bring any “sustained economic benefit to the Italian people, and it may end up harming Italy’s global reputation in the long run.”

The Chinese Foreign Ministry responded to the attack on Italy’s plan to join the Belt and Road by Garrett Marquis, a long-time ally of National Security Adviser John Bolton (who brought him onto the National Security Council). An unsigned editorial in Global Times, titled: “White House’s Criticism of Italy’s Plan To Join BRI Ridiculous,” reports that Lu Kang, spokesperson of China’s Ministry of Foreign Affairs, at a routine press conference today, said: “Italy, as a major country and economy in the world, is clear about its interests. It could make its own policies and decisions.” Global Times added:

“The BRI is an important international public good that China contributes to global cooperation for common development. China and more than 150 countries and international organizations have signed BRI cooperation agreements, which witnessed more than $6 trillion in cumulative trade between China and participating countries, Yang Jiechi, a member of the Political Bureau of the Communist Party of China Central Committee, said at the 55th Munich Security Conference in February, the Xinhua News Agency reported.”

The FT goes on to allege that,

“Italy’s support for China’s BRI initiative would undercut U.S. pressure on China over trade and would undermine Brussels’ efforts to overcome divisions within the EU over the best approach to deal with Chinese investments. Italy is a founding member of the EU.”

In an interview with the Italian financial daily Il Sole 24 Ore, Italian Undersecretary to the Economic Development Ministry rejects criticism raised by the City of London’s Financial Times and defends Italy’s sovereign choice to join the Belt and Road. “Sincerely, I am a bit surprised. I do not understand what it is, that is controversial,” Geraci said. “I confirm what I said in an interview with this newspaper last Feb. 21st. I said the same thing to the Financial Times: We work every day down to the last detail.

“It will be a framework agreement: Just the indication of some strategic sectors in which joint investments are promoted and orders by Italian firms are accelerated. We work on infrastructure, transport and highways, trade, industry, green economy. It will be up to private companies to choose whether to participate or not. If they do it, they will have guarantees in terms of protection from disputes and questions about rules.”

As for the U.S. position, Geraci stated:

“I wonder where such a big concern comes from. We will protect our know-how thanks to a ‘golden power’ rule we have in Italy, which is among the strictest in Europe. And we just fulfill demands from our companies to create for them more room in the most promising markets, such as China. Anyway, we have supplied the United States, as per normal exchanges we have with our main diplomatic partners, all insurances on the issue.”

On the concern about Italy being the first G7 country to sign a New Silk Road protocol, Geraci replied:

“So what? Poland, Hungary, Portugal, Greece have done it and I do not consider them second-class countries in Europe. Those who think differently do not have a real European view. And the G7 club may be a somewhat outdated concept: It no longer represents the real world economic powers, since it does not include either China or India.”

Italy is not “selling out” its ports, as some have claimed, he countered:

“We do not sell, at most we give concessions to create greenfield  investments, which means starting from zero. You cannot sell out things that were not there in the first place.”