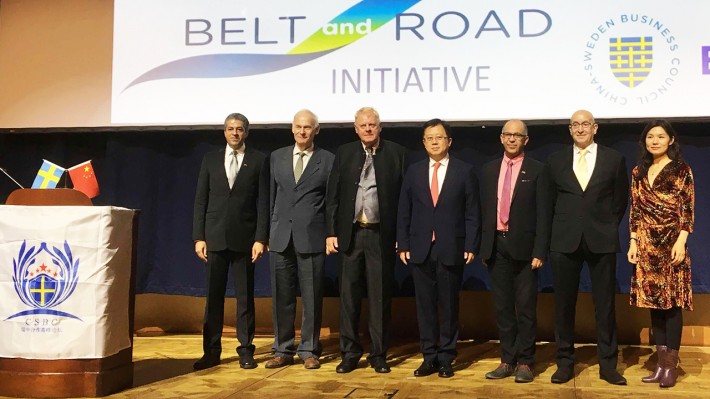 “If you want to get rich, build a road first!” With this old Chinese proverb the moderator Hussein Askary opened the 2nd China-Sweden Business Forum, which was hosted by China-Sweden Business Council (CSBC) and the new association called the Belt & Road Executive Group in Sweden (BRIX) at the Grand Hotel Winter Garden in Stockholm on September 28, 2018. This year’s main theme of the Forum was the Belt & Road Initiative (BRI). One hundred members and guests took part in the event. 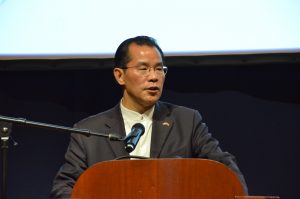 In his opening address, H.E. The Ambassador of the People’s Republic of China, Gui Congyou, received a spontaneous applause when he brought the news to the audience that the first New Silk Road cargo shipment from Sweden to China had been sent off the week before. A train with containers left the community Insjön in the county Dalarna for the long route via Gothenburg and Hamburg to Ganzhou International Port bringing high-quality wood for a furniture producer in the Jiangxi province in Southern China.

The authorities and media in Sweden have been oblivious to the BRI so far. But this Forum provided the insights necessary to change that attitude. The association BRIX that co-hosted the event was launched at the Forum to promote an open dialogue and greater awareness of the BRI and its benefits for Sweden in particular, and the world community in general.

One key aspect of the BRI is that it is not only about links to China, but an initiative to promote global connectivity. All nations of the world are invited to participate on their own terms in the BRI. Stephen Brawer, BRIX vice Chairman, in his presentation, pointed to a world map where all continents will be connected, in the future even with links reaching out to the Americas and Australia. He pointed to the September 3-4 Forum on China-Africa Cooperation (FOCAC) in Beijing where 53 African nations linked up with BRI to fulfill the African Union’s Agenda 2063 for a continent wide modern infrastructure network and eliminating poverty in the continent.

“to foster a new type of international relations” and “forge partnerships of dialogue with no confrontation and of friendship rather than alliance.”

The BRI should not be seen only as a “practical” transport system for trade, a U.K. strategy and PR senior adviser for Sino-European public relations, underlined that the BRI, since its launching by President Xi Jinping in 2013, also has a philosophical dimension of creating harmony, “to foster a new type of international relations”, and “forge partnerships of dialogue with no confrontation and of friendship rather than alliance”. She advised Sweden to establish institutions capable of developing long term BRI cooperation with China, just as the UK had done with an office for the BRI/related Asian Infrastructure Investment Bank (AIIB), a regional cooperation mechanism called Northern Powerhouse, the all parliamentary China-UK group, and the government’s Permanent Envoy to the BRI. 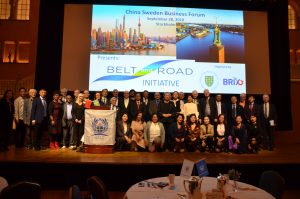 The typical misunderstandings of the BRI in Swedish business circles were dissected by Ali Farmandeh, chairman of the CSBC. The BRI is much more than Chinese production of Swedish goods. Furthermore, he stressed, “the New Silk Road is also not something far away, as many in the northern corner of Europe think. Among the 70 nations that have joined the BRI, there are also neighbors in Europe, who are already building their parts of the world connectivity network, projects where Swedish businesses can take part immediately.”

Working with China is sometimes challenging to the old world due to cultural differences, as Ying Wu, a former Student of Royal Technical School (KTH) in Stockholm and now CEO of SinceUs, explained in the final presentation at the Forum. Turning many Swedish business habits upside down, she brought many insightful and humorous examples of problems she has met in assisting Swedish clients to enter and expand in the Chinese market of 437 million e-commerce shoppers. She presented the case study of a Swedish brand Airnum, which she had helped bring from unknown to a bestselling brand in just one year.

These opportunities for small and medium size enterprises (SMEs) are important to make well known as best practices for further understanding in Sweden of the importance of the BRI and the opportunities for innovative businesses it opens up in so many countries worldwide.

The Swedish Wood products have a long tradition of being in the forefront of reaching out to new markets, since the industry was established in a big way as a pure export industry in the second half of the 19th century. A Swedish sawmill in Dalarna becoming a first explorer of the New Silk Road routes through Eurasia is very good news for the whole Swedish industry that is curious about the tremendous growth of new markets, cities and new industrial parks stimulated by the BRI.