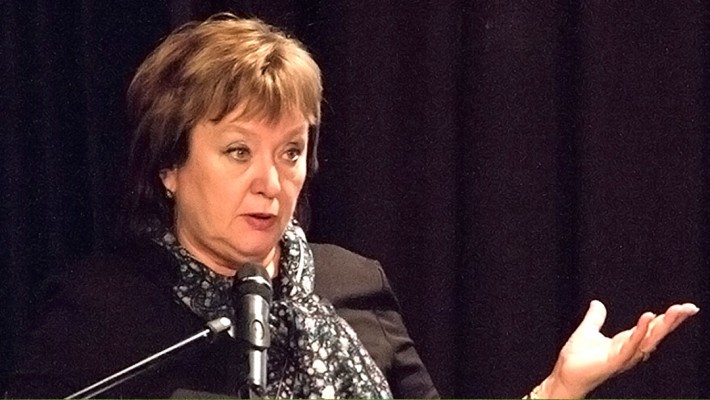 Today, the Progressive Socialist Party of Ukraine (PSPU), headed by internationally prominent economist Dr. Natalia Vitrenko, won their appeal in a key case–the PSPU’s lawsuit against the Ministry of Justice, for failing to accept the party’s revised Charter and Bylaws. This refusal to register the party is what has kept the PSPU from running candidates, and went along with the thuggery and criminality conducted against party members, activities, and property. A video of the court proceedings, and PSPU statement, were posted on this victory today.

While Dr. Vitrenko speaks in Russian, and the attorney and judge in Ukrainian, Vitrenko’s strong presentation on the exchange over the injustice to the PSPU, between MEP Matteo Zanni (Italy) and EU foreign affairs official Federica Mogherini, is very clear (22:30.) A translation of the notice on www.vitrenko.org:

“On July 4, 2018 the Kyiv District Administrative Appeals Court considered the Progressive Socialists’ appeal of the lower court decision, which had rejected the PSPU’s lawsuit agains the Ministry of Justice of Ukraine. “Ever since the Euromaidan regime came to power, a brutal struggle has been under way against the only extra-parliamentary systemic opposition party, the PSPU. The Party’s central office has been seized. Law enforcement agencies have instigated bandit and Nazi gangs against the Party’s leaders and against peaceful protest demonstrations organized by the PSPU. The Police and the SBU [Security Service of Ukraine] fail to investigate or call these thugs to account. “In parallel, the Ministry of Justice of Ukraine has refused to acknowledge and register either the decisions of three congresses of the PSPU, which changed the PSPU Program and Charter in accordance with the requirements of [new] laws, or the new composition of the Party’s Central Committee. The Ministry of Justice has thereby flouted Ukrainian and international law, through its political discrimination against the PSPU. “The Kyiv District Administrative Court, which is the lower court in question, took the side of the Ministry of Justice, with its unlawful decision of March 20, 2018. The PSPU appealed, and now has won, by defending the PSPU’s rights and demonstrating that the Ministry of Justice was politically motivated. “The Party was represented in court by PSPU Chairman, People’s Deputy of Ukraine of the II and III Convocations, Dr. of Economics Natalia Vitrenko.”