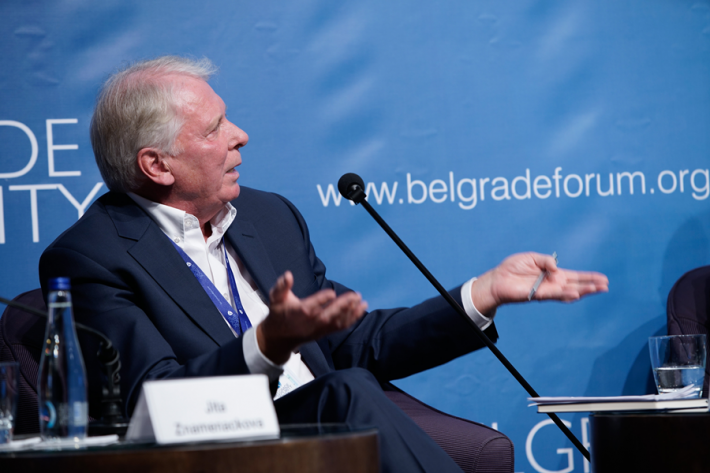 Jan. 4–Former German Ambassador to China and current head of the Herbert Quandt Foundation (BMW) Michael Schaefer, calls on Europeans to accept China’s offer of partnership in the New Silk Road in an interview with “Deutsche Wirtschaftsnachrichten.”

Schaefer blasts Europe’s reaction to the New Silk Road policy and accuses the Europeans of projecting their own thinking when they accuse China of hegemonic intentions. Even if not in explicit terms, he calls for rejecting the wrong geopolitical approach in favor of a win-win relationship.

“The geostrategic significance of the Silk Road cannot be underestimated. The Middle Kingdom has set itself to deploy its giant material resources for the expansion of the Chinese economy on the world market. China is carrying out this strategy in an intelligent way, not aggressively but by offering participation to all states– an offer that slowly is being accepted by the small Asian and central Asian countries, whereas in Europe we have a mostly negative reaction, if not a rejection. Here they accuse China of hegemonic intentions– a projection of our own behavior in the last century?”

“Many Europeans make the big mistake of looking at the relationship with the USA and China as a zero-sum game. But a close relationship with the USA does not at all exclude an interest-based relationship with China. We should not see China as a rival, but rather as a partner in key sectors. I am convinced that China wants to be a partner of the West. At least, China does not pursue military dominance and a geostrategic hegemonic position, but it will defend what it believes are its legitimate interests, in particular its territorial interests, with energy, if necessary also through a projection of its military power.”

Schaefer has met Xi Jinping several times, and in 2009, he accompanied him on five-day visit in Germany. Xi, Schaefer says, “radiates an impressive interior calm, fitting with his policy. He proceeds calmly, unagitated and strategically, making China fit for the challenges in the future. Don’t expect a rush job from him. He, like many Chinese, thinks in long time-periods. He is driven by the knowledge that China was the largest national economy in the world until the middle of the nineteenth century, and it will be so again in the future. For the Chinese it is not a matter of ten or twenty years. During his visit to Germany, he showed interest in our development, especially in economic-technological but also in social areas, like no one else I have ever seen.”

The Chinese system is one capable of learning, Schaefer says, explaining how it can react more quickly and better than western systems in changing its economic model. Political stability in China will depend on whether the system delivers on its promises. “Basically, we must presume that even a communist single party will be accepted as long as it delivers stability and welfare. Chinese culture is strongly influenced by Confucianism. This is no religion, but a regulatory philosophy. One of its main features is respect. For instance, respect of children for their parents, but also respect for higher entities. They pursue a harmonically functioning society where– differently from us–no excessive significance is attributed to individual self-realization.”