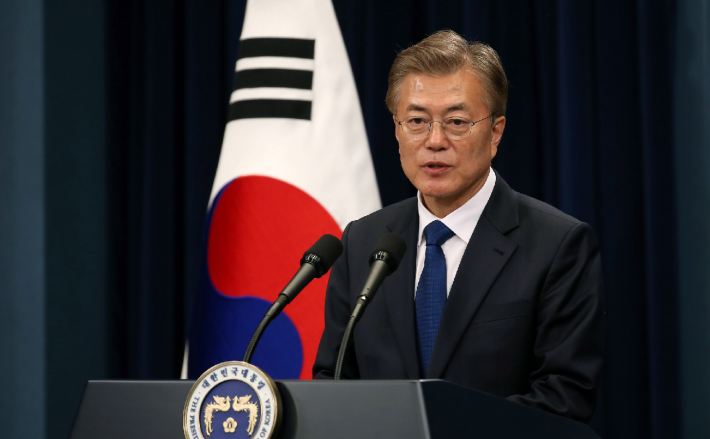 Dec. 16 – During his four-day visit to China, which concludes today in the city of Chongqing, South Korean President Moon Jae-in announced that he and President Xi Jinping have agreed “to actively look for ways of actual cooperation between China’s One Belt, One Road Initiative (BRI)” and South Korea’s own foreign policy initiative–the “New North” and “New South” policies–which seek greater economic and diplomatic cooperation with Eurasian as well as with Southeast Asian nations. Especially in light of Japan’s shift over the past several months toward the Belt and Road, Moon’s announcement is of great strategic significance, reflecting a move away from Western policies of geopolitical confrontation which today threaten to blow up the North Korean situation. As Moon stated explicitly, the Belt and Road holds the potential to bring peace and prosperity to the region.
In their broader discussions, the two leaders committed themselves to strengthening their bilateral relationship, and agreed to abide by the principles of mutual respect and regard for each other’s core interests. This is the basis for true “win-win” collaboration, Xi Jinping said, adding that he wants to promote the alignment of the BRI with Seoul’s development strategy.

That Moon made his announcement on the BRI in Chongqing is also important as this bustling city is a communications hub in western China that is “a pivotal location for China’s Belt and Road Initiative,” {Global Times} reported Dec. 15. Speaking at a business forum there, Moon elaborated further, according to a transcript of his speech cited by Yonhap News Agency. “I am confident a link between the One Belt, One Road Initiative and New North, New South policies will lead to peace and joint prosperity in the region and become a strong wave that spearheads the development of all of humanity,” he said.
For example, he detailed, “If the connection between an inter-Korean railroad and the Trans-Siberian Railway that South Korea is actively pursuing, meets China’s trans-China, Mongolia
and Russia economic corridor, [then] the rail, air and sea routes of Eurasia will reach all corners of the region,” Moon said.
Moon also called for efforts to build what he called a “digital Silk Road” between the two countries to assist the development of their IT industries and the fourth industrial revolution. Overseas markets are another key area of cooperation, he said. “I will actively support the joint advance of South Korean and Chinese firms into third countries,” he stated, and emphasized the importance of cooperation among countries in the region. (Japan’s Prime Minister Abe last week offered joint Japan-China funding of development projects in third countries.) Seoul and Beijing have already agreed to launch negotiations for an expansion of their free trade agreement (FTA), he reported, to include the service and financial sectors. The trade agreement went into effect in late 2015, but currently deals with products only. Lastly, Moon said, South Korea will work to strengthen its cooperation with China’s key regional governments, including Chongqing. “I believe economic cooperation between South Korea and Chongqing will greatly contribute to China’s development of [its] west, as well as balanced development of China, and I promise the South Korean government will do its utmost to boost their cooperation,” he told Chongqing’s Mayor Chen Miner.