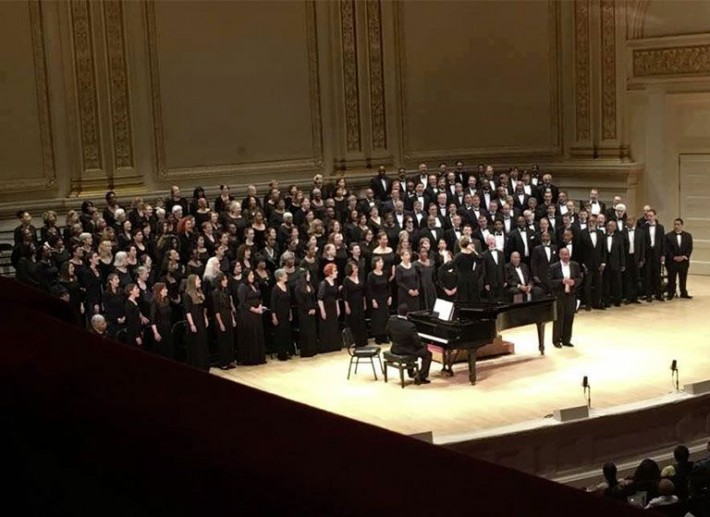 On Friday, June 30, 2017, at the Bruno Walter Auditorium of the New York Library for the Performing Arts, near Lincoln Center, a historic gathering of great musicians and associates of Sylvia Olden Lee,  from different generations, backgrounds and  accomplishment took place to discuss “The Aesthetic Education of Humanity Through Music.” The symposium was the second event of a two day “Tribute to Sylvia Olden Lee, Master Musician and Teacher,” sponsored by the Foundation for the Revival of Classical Culture, the Schiller Institute and the Harlem Opera Theater.

The Tribute commenced at Carnegie Hall on the evening of June 29 with a Classical concert of African-American Spirituals, (performed with both solo and choral singers) and works of Giuseppe Verdi, Wolfgang Amadeus Mozart, Ludwig van Beethoven, Franz Schubert, and Gaetano Donizetti. The audience of 2,100 was deeply moved by the quality of agapēbrought forth by the soloists, by the speeches of  those close to the immortal Sylvia Olden Lee, as well as the beauty of the choral performances. Rarely does a “community chorus” reach the stage of Carnegie Hall, let alone receive standing ovations, but the Sylvia Olden Lee Centennial Choir, comprised of four Schiller Institute New York Choruses (Manhattan, Brooklyn, Queens, and New Jersey), the Boston and Northern Virginia Schiller Institute Choruses, and the Convent Avenue Baptist Church Chancel Choir, sung with proper voice-placement at the “Verdi tuning” (A=432 Hz) and was inspired, sensing that Mrs. Lee was indeed present there. 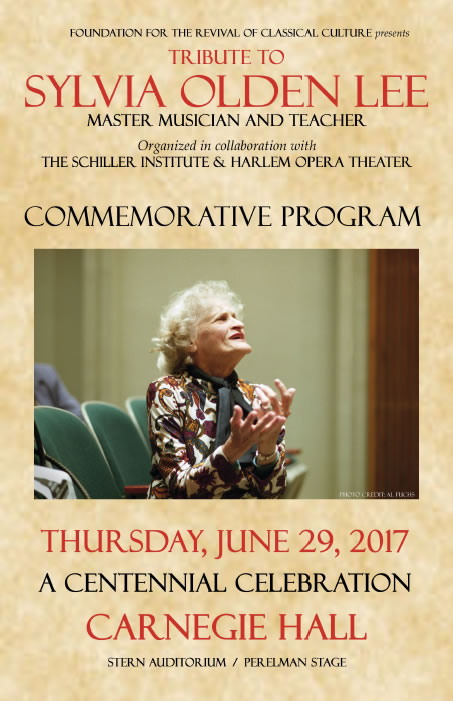 The following day’s Symposium, on the theme “Calling All Teachers and Other Lovers of Wisdom: The Aesthetic Education of Humanity through Music,” was moderated by Dennis Speed of the Schiller Institute. The first session opened with remarks from Lynn Yen, Executive Director of the Foundation for the Revival of Classical Culture, after which selected members of the Sylvia Lee Centennial Chorus sang Hall Johnson’s arrangement of “I’ll Never Turn Back No More,” directed by Diane Sare, with soloists Frank Mathis, baritone and Michelle Fuchs, soprano. Soprano Gudrun Bühler followed with Desdemona’s aria from Verdi’s Otello, accompanied by Richard Alston on the piano. Music Director Sigersonshowed the audience the two pianos on the stage, one tuned to the Verdi A=432 Hz, and the other tuned to A=441 Hz. The audience of musicians, educators, and students would also get to hear singers on each piano, comparing the different tunings. He then introduced the videos to the gathering.

Before introducing Carmela Altamura, founder of the Altamura Center for the Performing Arts and the Altamura-Caruso competition, Sigerson showed a 1988 Schiller Institute video from Casa Verdi in Milan, with baritone Piero Cappuccilli demonstrating the superiority of the Verdi Tuning. Maestra Altamuraspoke of her work, and then coached three of her students, tenor Mauricio Trejo, soprano Jennifer Adams, and baritone Gustavo Ahualli on aspects of singing correctly, and creating bel canto tone. The difference between the higher tuning and the proper tuning was especially evident in the soprano’s high notes in Oscar’s aria “Saper vorreste” from Verdi’s Un ballo in maschera. However, in the baritone’s example, which he sang first at the 440 Hz and then at 432 Hz tuning, it was the tone color and the warmer, rounder quality that was audible, as well as the proper register shift.

After a brief intermission, tenor Reginald Bouknightand pianist Richard Alston presented the first song of Beethoven’s song cycle, “An die ferne Geliebte.” Maestro Tony Morss spoke on the history of musical tuning and the Schiller Institute’s tuning initiative, followed by a dialogue with Simon Estes. They were joined after that in a panel discussion by Elvira Green, Osceola Davis, Gregory Hopkins, Eve Lee (Sylvia Olden Lee’s daughter), and William Wray, which not only covered the amazing influence and impact that Sylvia Olden Lee had on each of them and their circumstances, but the necessity to continue that mission, for the future.

Gudrun Buhler: The Aesthetical Education of Humanity Through Music

Mauricio Trejo (tenor): The Aesthetical Education of Humanity Through Music

Jennifer Adams (soprano): The Aesthetical Education of Humanity Through Music

Gustavo Ahualli (baritone): The Aesthetical Education of Humanity Through Music

A Discussion with Simon Estes: The Aesthetical Education of Humanity Through Music

A Discussion of Sylvia Olden Lee’s Life and Work