Interview by Sputnik with Helga Zepp-LaRouche 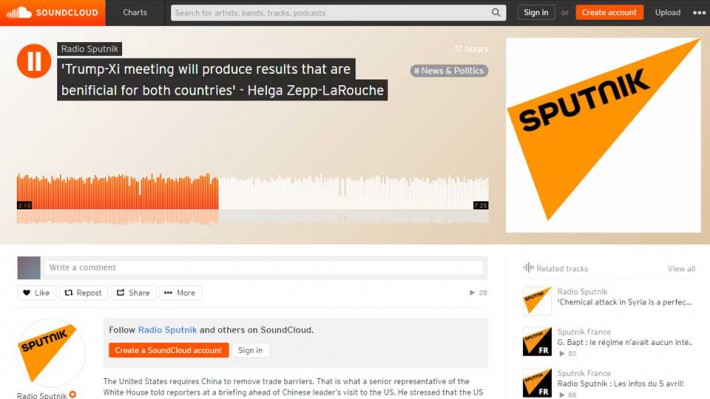 Interview by Sputnik with Helga Zepp-LaRouche

Listen to the interview on Sputnik >>

April 5, 2017 — This is a transcript of an interview by Sputnik with Helga Zepp-LaRouche, regarding the upcoming summit between Presidents Xi Jinping and Donald Trump:

Q: What will the tone of the meeting be?

HELGA ZEPP-LAROUCHE: Oh, I think it will be actually cordial. The Western media who are usually wrong are trying to reduce this whole question to some geopolitical conflict, but I think both sides have prepared this meeting very well. I think when Secretary of State Tillerson was in Beijing last month to prepare the visit, he said that the U.S.-China relationship in the Trump Administration would be a very positive relationship, built on no confrontation, no conflict, mutual respect, and always searching for a “win-win” solution. And that was exactly the formulation that was used by Xi Jinping in 2012 when he called for building a new type of major country relationship between China and the United States. Now, this was rejected by President Obama at the time. But the fact that Tillerson is now using the exact, same formulations shows a very positive signal. And I think that since China has put the New Silk Road policy on the table — or the Belt and Road Initiative, as it’s called now — since 2013, and has been building this New Silk Road, with the idea that the United States should join it, too, I would not be surprised at all, if something like that would be discussed, to the big surprise of many.

Q: I see. Now, earlier Trump had accused China of raping the U.S. economy. He called the country a currency manipulator, and even threatened to impose high tariffs on Chinese imports, though, with that said, what reaction should we expect from the Chinese leader? What positions will they be taking?

ZEPP-LAROUCHE: I don’t think that Xi Jinping will react to the campaign tone of the candidate Trump, because now Trump is President. And I think if they put on the table the idea that China would invest in the infrastructure in the United States, Trump himself has announced the need to have a $1 trillion program to reconstruct the American infrastructure. There was recently a conference in Hongkong where Chinese economists estimated that the real requirement is $8 trillion. Now, the way how to reduce the trade deficit is if there would be direct Chinese investment in infrastructure, maybe not immediately, but indirectly; maybe one would have an infrastructure bank, where China could put its investments in, or some solution like that. But I’m convinced that they will absolutely come out of this summit with results beneficial to both countries.

Q: It’s interesting that you talk about a positive solution the trade deficit, that you just mentioned, with China could possibly create a special investment bank, but is there anything else that Trump could do to somehow reduce this trade deficit? Or is there any way that President Trump could somehow improve the relations between the countries, and improve the trade between the countries?

ZEPP-LAROUCHE: Well, Trump has recently mentioned several times that he wants to go back to the American System of economy, the system of Alexander Hamilton, of Lincoln, of Henry Clay, and it is actually that system which made the United States great following the War of Independence. And that was a highly protectionist system. Alexander Hamilton created the United States by creating a National Bank, a credit system, and for example, the German economist Friedrich List pointed to the difference between the American System of economy and the British System of economy, meaning that the American System which was created by Hamilton basically says the only source of wealth is the creativity and productivity of the labor force; as compared to the British System which says you have to buy cheap and sell expensive, and control trade, and keep labor costs as little as possible. So, if you actually look at what China has been doing with the Chinese economic miracle of the last 30 years, it is much closer to the philosophy of Alexander Hamilton, than it would be to the system of globalization and so-called “free trade.” Because I think that the Chinese system of free trade is not exactly the same one what the British and the Americans under the Obama and Bush administrations have been thinking about. So, if Trump says, OK globalization led to an outsourcing productive jobs and I want to recreate the American economy, well, that’s the way how to reduce the trade deficit, because the reason why there’s a trade deficit is because many of the products in the last 16 years of the Bush and Obama administration became increasingly less competitive, for example the car industry. The reason why you have more cars imported, from Japan, Korea, Germany, than the other way around, is because these cars are better than American cars. And what America has to do, what President Trump has to do — and I think that’s what he intends to do — is to reconstruct the American economy on the highest productive level. The infrastructure is only the precondition, but then there will be other areas, like in the nuclear fission, but especially the development of fusion technology, space cooperation with other countries, so there are many areas where you can leapfrog into the most productive areas in the economy, and I think that’s what Trump intends to do.

Q: It’s interesting that you talk about that, and I really like that you mention that subject. Unfortunately we’ll have to do that at a different time. Apart from the issue that we’ve already discussed, are there are other issues that will be on the table between the Chinese leader and the U.S. President?

ZEPP-LAROUCHE: Well, obviously, the North Korea issue will be very high up on the agenda, given the recent missile tests by North Korea. But there, one has to understand that North Korea is doing this, not because they intend an aggression against South Korea or Japan, or the United States. They are doing it in reaction to the deployment of the THAAD missiles, which both China and Russia have also said are security threats to their own national security; and, North Korea is reacting to the very big maneuvers involving the United States, Japan, and South Korea, which are ongoing right now. So the way to reduce that, and that would be my guess, that they will get an agreement to re-propose the Six-Party talks, to try to find a solution, or even have maybe Five-Party talks, to try to really work out a real solution one could offer to North Korea. But it is my conviction that the only way how this conflict can be solved forever, is to extend the New Silk Road into Korea, have a unification of South and North Korea, and then develop together, the North, obviously, with the sovereignty of North Korea being taken into account; but I think the idea of overcoming the terrible economic hardships and using the high-skilled labor you have in North Korea! People don’t know, that there is actually a highly developed labor force in North Korea. So I think the New Silk Road Belt and Road Initiative, even in the short or medium term, would be the framework with which to solve the North Korea problem forever.

Q: All right. Well on that note I would like to thank you very much for joining me today, Helga. It was a pleasure having you here, and I’d love to have you back in the future.