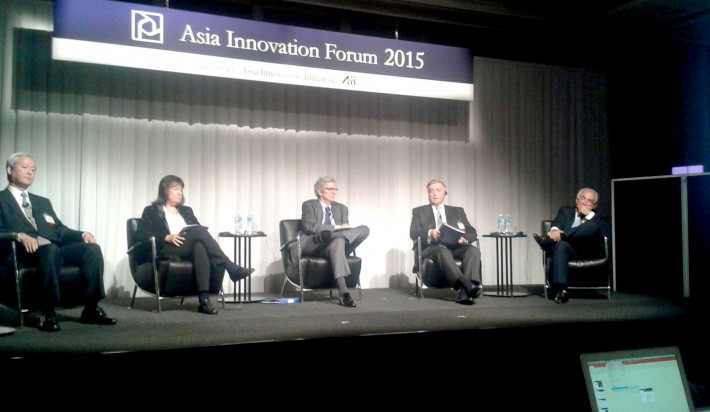 Schiller Institute founder and chair Helga Zepp-LaRouche addressed two Tokyo events on Dec. 2, delivering a clear message to 400 Japanese business leaders that the World Land-Bridge is the only way to end the tyranny of war and geopolitics and solve the ongoing Middle East crisis.  In the morning, Ms. Zepp-LaRouche addressed the seventh annual Asia Innovation Forum, attended by 300 young Japanese entrepreneurs and hosted by Nobuyuki Idei, former Chairman and CEO of the Sony Corporation and now the founder and CEO of Quantum Leaps, as well as the founder of the Asia Innovators’ Initiative.

In her comprehensive presentation, Ms. Zepp-LaRouche warned of the global pattern of regional wars that can easily lead to global catastrophe, including a new superpowers conflict, and emphasized that the only way to change the course of events was by fundamentally changing the paradigms of thinking.  She went through a detailed presentation on the World Land-Bridge, identifying the major global projects that can transform the world, citing the Xi Jinping “One Belt, One Road” as the seed of a global renaissance.  After spelling out the immediately available great projects, she developed the idea of mankind as a unique species capable of creating a future through creative discovery.  She developed the American System concepts of Alexander Hamilton, and Henry and Mathew Carey, and detailed how those ideas spread around the globe in the 19th century, creating the modern nations of Germany and Japan, under Bismarck and the Meiji Restoration.

Ms. Zepp-LaRouche was joined on the panel by former IMF Managing Director Dominique Strauss-Kahn; former head of the Russian Railroad Corporation and co-founder of the Rhodes Dialogue of Civilizations, Vladimir Yakunin; and Paulo Nogueira Batista Jr., the former Brazilian director of the IMF, who is now a Vice President of the New Development Bank, founded by the BRICS and heaquartered in Shanghai.  The panel was moderated by Daisuke Kotegawa, a former Japanese Ministry of Finance top official who was also Japan’s IMF director at the time of the 2007-2009 financial crisis.

During his presentation, Dr. Yakunin strongly endorsed Ms. Zepp-LaRouche’s World Land-Bridge proposal, noting that Russia’s Eurasian Development Corridors and China’s One Belt, One Road policies were thoroughly compatible and represented the “new paradigm” of thinking that is urgently needed to avoid wars brought on by the dying system of neo-liberalism.  He emphasized that Presidents Putin and Xi were committed to Russian-Chinese cooperation to realize those Eurasian infrastructure links.

In his opening remarks of the panel, Strauss-Kahn detailed the ongoing crisis of the world financial system, and acknowledged that the austerity policies were a failure and had to be replaced by a growth model, while admitting that there is no real support for a viable change in policy from within the dominant world financial institutions today.

In the afternoon, Ms. Zepp-LaRouche addressed a separate event, sponsored by the Canon Institute for Global Studies, which was attended by 100 top executives of the major Japanese industrial corporations and financial institutions, as well as of the Japanese government’s overseas investment agencies and funds. EIR Senior Editor Jeffrey Steinberg also addressed the Canon Institute forum, delivering a detailed picture of the real process of economic and social breakdown of the United States. Ms. Zepp-LaRouche delivered her presentation on the World Land-Bridge as the only way to defeat the geopolitical drive to world war.  Nogueira Batista gave an in-depth report on the progress of the New Development Bank and the plans to begin issuing development loans by April 2016.  He reviewed the history of the launching of the New Development Bank by the BRICS countries in response to the abject failure of the “Washington institutions”—the IMF and the World Bank—to reform in the wake of the 2008 financial collapse.

Video proceedings of the two events will be available soon.