Opening Remarks to Schiller Institute Concert of W.A. Mozart’s Requiem in D minor, A Remembrance of President John F. Kennedy on the 50th Anniversary of His Death & A Recommitment to the Principles of His Presidency

[Note: The greetings of Monsignor Murray and President Higgins are as written.]

Good evening. My name is Matthew Ogden, and it is my great honor to welcome all of you here to this event tonight, as we gather to mark a very solemn occasion: The death of our President John Fitzgerald Kennedy, 50 years ago today. Wolfgang Amadeus Mozart’s Requiem Mass was performed as part a liturgy, in memoriam of President Kennedy following his death, for his wife and family at Boston’s Cathedral of the Holy Cross. Tonight you will hear members of the Schiller Institute Chorus, joined by an orchestra and soloists, specially assembled for the occasion, under the direction of our conductor John Sigerson. I would like to thank especially, Nancy Novelly, director of music here at St. Mark [Catholic Church, Vienna, Va.], Father Patrick Holroyd, and the entire congregation for the opportunity to hold this special event. 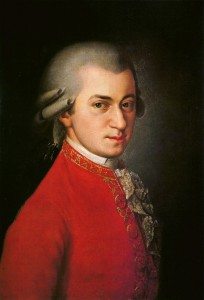 Mozart himself died before having the chance to complete this work, his final composition, much in the same way that Kennedy’s life was cut short, brought to a sudden and early end, before he could complete his work. His work still remains unfulfilled. And it is for this reason that we have decided to honor him tonight, with a piece that is altogether fitting, a piece that not only promises that justice shall ultimately prevail, that all that lies hidden shall eventually be revealed, and that no guilty act shall go unpunished. But also, that although we must die, life does not end, that mortality is a condition merely of the flesh, not of our spirit. As President Kennedy said, “A man may die, nations may rise and fall, but an idea lives on. Ideas have endurance without death.”
The resurrection of Kennedy’s spirit today is the responsibility of us, the living. The purpose of our concert here tonight, is to recommit ourselves to the principles of his Presidency, to peace, to progress, and to the imagination of a future that we may give to our posterity, for our nation and for the entire world.
We have received some greetings tonight, for our concert from around the world. And before introducing our two special guests tonight, who will be giving some opening remarks, I would like to share with you, two of these greetings, which I think President Kennedy would have appreciated very much.

The first comes from Msgr. Raymond Murray, who is the Rector of the Cardinal O’ Fiaich Memorial Library in Armagh, the ecclesiastical seat of Ireland. And as I’m sure you well know, Kennedy was a proud Irish Catholic, whose family had roots stretching back centuries through Irish history. His great-grandfather was forced to emigrate in 1848, to escape the Great Famine. He came to Boston and just over a century later, his great-grandson was elected President of the United States.

As President, John Kennedy travelled back to visit his ancestral homeland in County Wexford, just south of Dublin, and the Irish people remain immensely proud of him today. So Monsignor Murray’s greetings are as follows:

It is not just that the shot that rang out and killed John F. Kennedy re-echoes now in the sadness of history or that those of us alive at the time recall the shocking moment when we heard of his death. His smile of friendship, his eloquence, his earnest plea to each of us to ask ourselves what we can do for our country remain forever. In our global world of increasing fraternity our calling is to answer his message of kinship – his speech at Wexford spelt out that he is one of the greater Irish family, his speech in Berlin emphasised his identity with the rich inheritance of that great city. That is symbolic of humanity’s close relationship.

John Fitzgerald Kennedy! Fitzgerald recalls for us Lord Edward Fitzgerald, courageous United Irishman inspired by the American and French revolutions. John would have been proud of that. Kennedy – Cinnéide – is a name that derives from the nephew of Brian Bórú, king of Ireland (c. 941-1014). And we Irish are proud that John F. Kennedy was the first man of Gaelic-Irish ancestry to hold the office of President of the United States of America.

Let us continually repossess his message of fraternal love and peace. 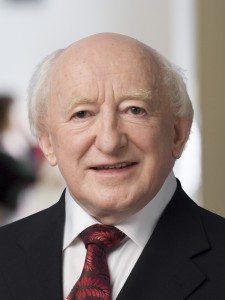 Michael D. Higgins,
President of the Republic of Ireland

And our second, brief, but very important greeting that I wish to read, comes from Michael D. Higgins, the President of the Republic of Ireland, which reads as follows:

Michael D Higgins, President of the Republic of Ireland, extends his best wishes for the commemoration concert for the beloved, departed son of Ireland, United States President John Fitzgerald Kennedy.

And now, without further ado, I would like to introduce to you, the founder of the Schiller Institute, Mrs. Helga Zepp-LaRouche, who will deliver some opening remarks. [applause]