Opening Remarks by Helga Zepp-LaRouche, Founder and President of the Schiller Institute, to Schiller Institute Concert of W.A. Mozart’s Requiem in D minor, A Remembrance of President John F. Kennedy on the 50th Anniversary of His Death & A Recommitment to the Principles of His Presidency

I am highly honored to speak to you on the occasion of the performance of Mozart’s {Requiem} in order to commemorate the 50th anniversary of the assassination of John F. Kennedy.
That murder has turned out to be one of the most tragic events for the course of history, not only for the U.S., but for the world.

Because of that murder and its cover-up, it has turned hope, and a beautiful vision for the future and better conditions for all of mankind, into despair and a feeling of helplessness.
When, on the day after the assassination my English teacher came into the classroom bringing up the murder of the U.S. President, who had been in Berlin only a short time before, several of us students broke out in tears. 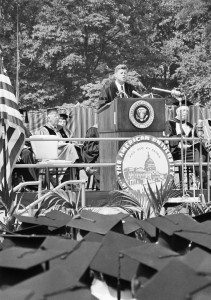 John F. Kennedy had a profound understanding for the role of great art, being as he put it, “close to the center of the nation’s purpose and a test of the quality of a nation’s civilization.” How different would the world have been, and would be today, if he had lived and realized his ideas. In the famous speech in 1963 to the graduating class of the American University, only months after the world narrowly escaped from the possible extinction with the Cuban Missile Crisis. He talked about the possibility of world peace as the “most important topic on Earth.”

“What kind of peace do I mean?” he said. “What kind of peace do we seek? Not a Pax Americana enforced on the world by American weapons of war. Not the peace of the grave or the security of the slave. I am talking about genuine peace, the kind of peace that makes life on Earth worth living, the kind that enables men and nations to grow and to hope and to build a better life for their children — not merely peace for Americans but peace for all men and women — not merely peace in our time but peace for all time.”

That is the American spirit, which the whole world hopes will return.

In the same speech, he spoke about those who think that peace is impossible, that “war is inevitable, that mankind is doomed, and that we are gripped by forces we can’t control.”

Let us today make the solemn oath that we will end the paradigm of pessimism of the last 50 years, which have passed since his murder, and promise to future generations with his words:

“We need not accept that. Our problem problems are man-made — therefore they can be solved by man. And man can be as big as he wants. No problem of human destiny is beyond human beings. Man’s reason and spirit have often solved the seemingly unsolvable — and we believe they can do it again.”