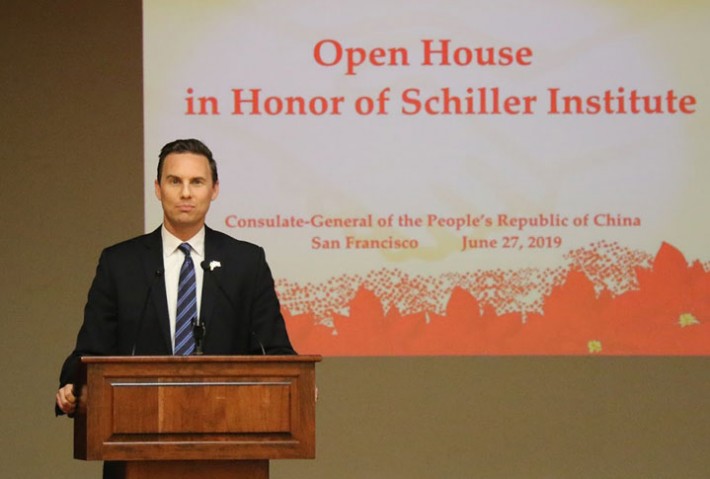 On June 27, 2019, the Schiller Institute was invited to the Chinese Consulate in San Francisco to honor the life of the great American Statesman Lyndon LaRouche, and to celebrate the common aims of both nations and cultures.

Everyone who attended the Open House in Honor of the Schiller Institute—as each of the three large screens proudly declared as you walked into the hall—now know the power and importance of exonerating Lyndon LaRouche. It was on the faces of everyone: a sense of joy, of optimism, of urgency, and a sense of responsibility towards the future because such a man, such an America, such a view of the world and of humanity, and such an organization exist, and at a moment when without a true America, without such a world view, mankind might not survive. 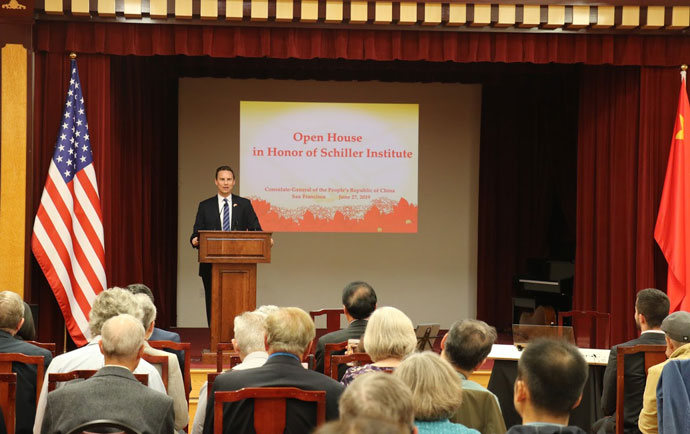 The idea of an event was first initiated with the passing of LaRouche this past February 12. The consulate was informed soon after, and a meeting between SI reps and the Consul General was held the following week. After an hour plus long discussion with the CG and the Deputy CG ranging from LaRouche’s life and ideas to the strategic situation, the idea of an event between the SI and the Consulate was proposed.

So, on the very eve of the G20 summit (Putin and Trump would be meeting at 10 pm PT this same night), the Schiller Institute brought nearly 70 guests to an event hosted by the China Consulate. To reciprocate the generosity of the Consulate, the Schiller Institute brought Beethoven’s Op. 69 for a universal demonstration on the potential collaborative relationship between the U.S. and China with piano and cello, played at the lower tuning. Including speeches by CG Wang and SI rep Mr. Steger, the event set a new standard for collaboration around the power of LaRouche’s ideas. 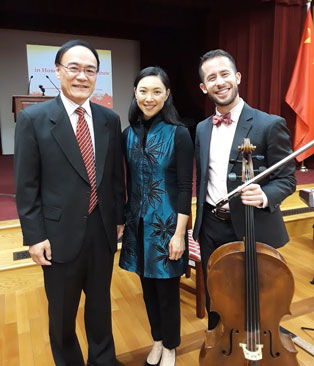 The event started with the Deputy Consul General introducing the Consul General Ambassador Wang Donghua, Schiller Institute rep. Michael Steger, and acknowledging special guests the DCG and a Consul from Vietnam, a member of the Indonesian Consulate, a member of the East-West Accord, and the President of the Russian American Congress, as well as two local Republican leaders.

The Consul General then gave a very hard hitting speech expressing China’s frustrations on the current trade talks before touching on the importance of the BRI. Given the CGs overt political tones, Mike was free to address the broader strategic aspects of the global dynamic, beginning with the introduction of the BRI by Xi, in consultation with Putin, during the chaotic coup in Ukraine, which only indicates the role of the BRI to end the risk of nuclear war today.

In summary, the importance of the G20, and the BRI as exemplary of a new global system, was on the minds of everyone on the eve of this critical summit. It is also the 35th anniversary of the SI, and the 40th anniversary of China-US diplomatic relations, and the LaRouche view of the next 40 years has never been more important. There is a long history of the U.S. and China, from Columbus’ voyage of the Italian Renaissance (nb: Columbus is honored with massive stone statue on Telegraph Hill in S.F. looking east across the GG bridge to China), to Ben Franklin printing sections of Confucius Analects in the Gazette, to Lincoln’s appointment of Ambassador Burlingame to China, to Grant’s tour of China, and his identification then of China’s coming dominance of the global economy, to FDRs insistence that no foreign ships would enter Chinese ports after the defeat of Japan, and this true history of the U.S. and China makes the point that this is the real America, the LaRouche America, and it was this that the American people are calling for today, however darkly through the mirror.

China’s development is a modern miracle and the BRI is a precious contribution to the world that must be grasped now. FDR wanted to extend U.S. production to develop the world, but his legacy was nearly destroyed. It was Lyndon LaRouche who picked up this fight for global development after WWII, and today, it is China who is making this offer, this precious gift for a new system of collaboration, of sovereignty, of space exploration. As a Russian scientist once said, space exploration makes most clear the nature of economy, that money is worthless. Energy, water, infrastructure, science and culture are paramount for a new global system, on Earth and on the Moon. This is the BRI, it is a great gift to the world that must be adopted by the U.S., and it is the very essence of the true U.S. legacy of Lincoln and LaRouche.

It’s our job to organize the American people to insist that it is adopted, otherwise the corruption in Washington will crush any potential for a breakthrough. It is not only up to the leaders, but up to us to create a new culture of development.

There was strong applause for both speeches and the DCG wishfully referred to Mike as the representative of the American people, before introducing the music.

Before the music began, we quickly asked for collaborators on the music of China, and in the course of the evening we met a music teacher, one of the very first students of piano after the cultural revolution, who wants to work on Chinese music for four hands with My-Hoa! We also met a violinst/violist who plays for the SF Ballet, a friend of one of the Consuls, so we are conspiring for future collaborations, and intend to make more classical Chinese pieces available in western notation. 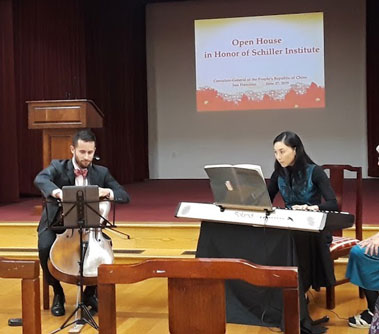 My-Hoa and Andres then played Mo Li Hua or Jasmine Flower on keyboard and cello, in honor of our guests, before a lively rendition (without repeats) of Op. 69. Uncertain, the audience gave a standing ovation after the first movement, but once aware, were absolutely silent after the second, allowing the adagio cantabile of the opening of the third movement to strike the harmonious chord of collaboration that Beethoven intended.

It was now a festive celebration, with food, discussion, and humorous delight often brought by the DCG, our leading contact. The SI brought a cross section of people, from our more eccentric contacts to a range of young people, blue collar Americans, many Facebook contacts within the Chinese community in S.F., a leading retired Pakistani journalist, and all, young and old, left beaming.

The Consul General, and his staff of twenty or so, mingled and talked with all of the guests for over an hour. There was a long discussion with the Indonesian representative on the political culture of the U.S. going back to the cultural revolution and the importance of classical culture, where nations adopt a profound mission. Both she and the Vietnamese DCG were interested in holding future events with the SI. The Russian associated contacts who came were struck by the optimism, became much more educated on who we are, and one is planning to sign for exoneration.

At the end, the Consul General said good-bye and said he was very touched. We had brought LaRouche’s America to the representatives of China, and they were profoundly overwhelmed with joy. When asked by his DCG if we should do this once every two years, he said, “Once a year, at least!”

To those of us in the SI, it comes as no surprise that Lyndon’s personality and vision have such an overwhelming effect, but we also know that it is not always so easy to convey. In this case, we feel triumphant in our attempt at such a historic moment, and intend to carry that spirit into our work, outreach, and follow-up in the critical days and weeks ahead. 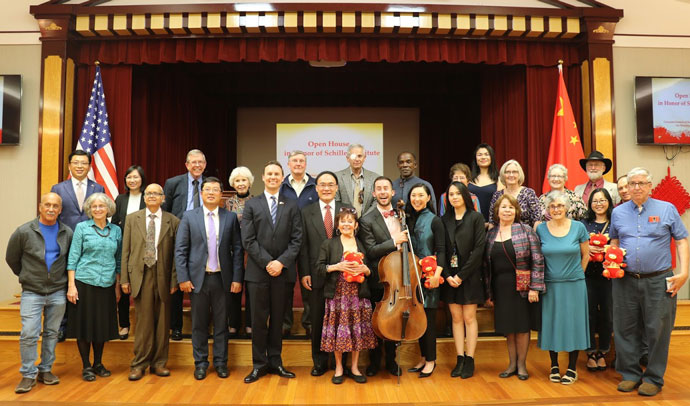