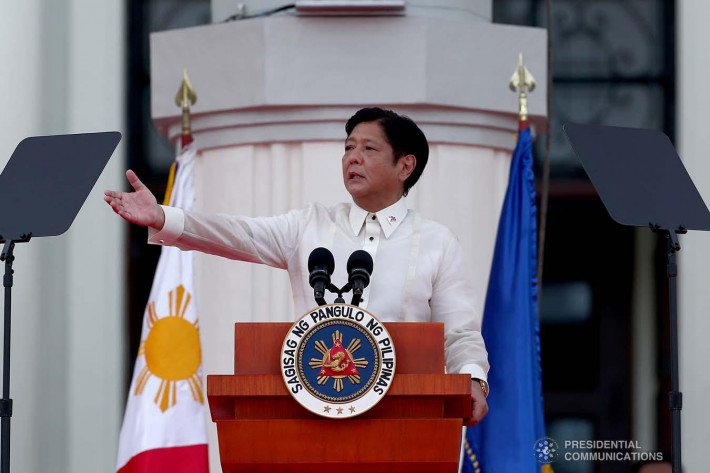 July 2, 2022 (EIRNS)–Ferdinand “Bong-Bong” Marcos Jr. was inaugurated as President of the Philippines on Thursday, following up the ceremony with a very substantial meeting with Chinese VIce President Wang Qishan who had headed the Chinese delegation to the inauguration. (It is notable that the Biden Administration sent Kamala Harris’s husband, the “second gentleman” Douglas Emhoff, to head the U.S. delegation, a lowly designation indeed.)

The Manila Times reports that President Marcos told Vice President Wang that China is  “the most powerful partner of the Philippines,” and that the Philippines’ “good-neighborly friendship is in the fundamental interests of both peoples.”

“The new Philippine government attaches utmost importance to the relations with China, and is willing to deepen its participation in the joint construction of the [One Belt One Road], join hands with China in coping with regional challenges and elevate the bilateral ties to a higher level,” Marcos said, as quoted by Xinhua. This is precisely what the neocons in the U.S. feared with the Marcos overwhelming election victory.

Wang told Marcos that the Philippine leader and his family have made “great contributions” to enhancing China-Philippine friendship. It was Bong Bong’s Mother Imelda Marcos (the First Lady to Ferdinand Marcos Sr.) whose visit to China in 1974 opened relations between the two nations (see the famous Mao “kiss on the hand” of Imelda here.

Wang added: “The Chinese side has always given priority to the Philippines in its neighborhood diplomacy, and is ready to work with the new Philippine government in carrying on with their friendship, boosting mutual trust and deepening cooperation so as to usher in a new ‘golden age’ in bilateral ties.”

Regarding the South China Sea issue, near the top of the list of U.S. efforts to undermine Chinese relations with the Philippines and others in the region, Wang called for the two countries to “properly resolve differences and jointly safeguard peace and tranquility” in the contested waters.

The Marcos regime is re-opening discussion regarding joint exploitation of resources in contested waters.

During a recent event of the Association for Philippines-China Understanding, Marcos said he would continue Duterte’s independent foreign policy. “This is what we feel is best in the national interest and I feel it is to be advantageous not only to our friends in China but to all our friends around the world,” he said. He added that “our strongest partner has always been… our close neighbor and our good friend, the People’s Republic of China.”