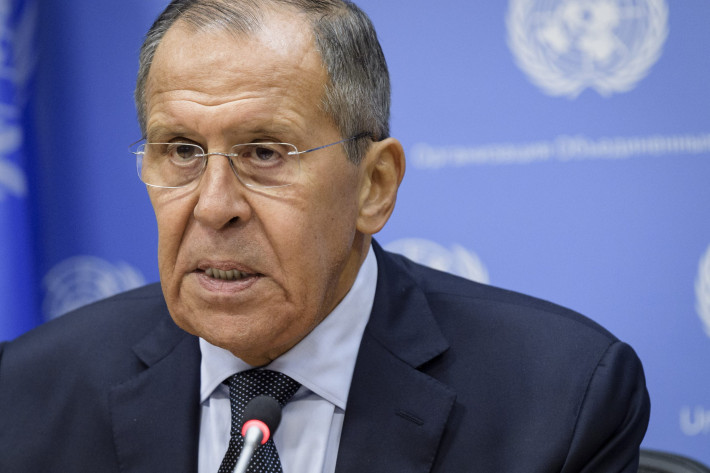 Sept. 28, 2021 (EIRNS)—Russia’s Foreign Minister Sergei Lavrov used his address at the United Nations on September 25, to make clear the important difference between international law and the reality behind the sophistry of a “rules-based order.” International law is a principle based upon “right is might”—not “might is right.” The latter is behind the “selfish interests” of the “so-called ‘rules-based order’ concept that the West is persistently introducing into political discourse as opposed to international law.” The U.S.’s “Summit for Democracy” makes democracy into a wedge to get into countries’ internal affairs, but there can be no challenging the undemocratic reality outside of countries, such as NATO. Talk of democracy—such as the U.S.’s “Summit for Democracy”—is a cover for interfering into sovereign countries and has no reality for relations between countries, where the undemocratic military weapons of NATO are not to be brought up. “The use of unilateral restrictive measures” against Cuba, Venezuela, Nicaragua, “violate the Charter-based principle of non-interference in internal affairs of sovereign states… undermines the prerogatives of the Security Council,” and even ignores the UN call “to suspend them at least for the period of the pandemic.”

Lavrov said that it was now time to stop the “policy aimed at undermining the UN-centric architecture” and choose the path of “rejecting any confrontation and stereotypes,  and joining efforts to address key tasks of humanity’s development and survival. We have enough instruments for this.” He enumerated them. President Vladimir Putin has proposed a P5 summit for a “frank discussion on global stability issues.” As there were “great expectations” for the “prospect of the Russian-American dialogue” on arms control, per the U.S.-Russian summit at Geneva, this could work. He referenced Biden’s extension of the New Strategic Arms Reduction Treaty as encouraging. Russian proposals on addressing the cyberwarfare problem was a basis for common agreement, where concerns can be examined “in a transparent manner, relying on facts.”

“In Afghanistan, Libya, Syria, Yemen and in other hotbeds, all external actors must show an understanding of the cultural and civilisational specifics of society, reject politicization of humanitarian aid, and assist in the creation of broadly representative bodies of authority that would involve all major ethnic, religious and political forces of the relevant countries. Guided by such an approach, Russia has been constructively engaged in the promotion of the Afghan settlement via the extended Troika and the Moscow format.” He added, “It was with great interest that we perceived the Global Development Initiative proposed by President of China Xi Jinping, which resonates with our own approaches.” Lavrov finished with a twinkle: “In conclusion, I would like to propose a hashtag #UNCharterIsOurRules.”