Natalia Vitrenko: ‘History Acquits Us and Will Be Proud of Us. The Banning Of Our Party Is Unjust And Unlawful.’ 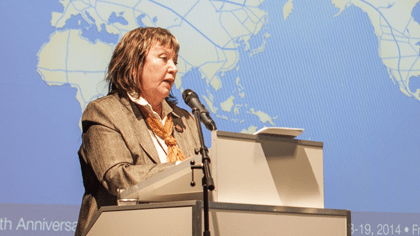 Natalia Vitrenko: ‘History Acquits Us and Will Be Proud of Us. The Banning Of Our Party Is Unjust And Unlawful.’

October 2, 2022by madeleine in General

Oct. 1, 2022 (EIRNS)– The following statement was released on Sept. 30 by Natalia Vitrenko, and was received by the Schiller Institute. We hope to have more details soon on the outrageous violations of due process and “democratic” norms by the Ukrainian Presidency, Ministry of Justice, SBU and Supreme Court in this case.

Message to members of the Progressive Socialist Party of Ukraine (PSPU), members of the Central Committee of the PSPU, and friends all over the world:

I believe that this not only is a politically motivated punishment of our party, but it tramples on all the foundations of European democracy. The principle of the supremacy of law, enshrined in the Constitution and in conventions, has been trampled—a principle that consists of lawfulness; legal certainty; the prohibition of arbitrary actions; guaranteed access to due process, provided by independent and fair courts; respect for human rights; the prohibition of discrimination; and guaranteed equality before the law.

The PSPU’s Appellate Complaint smashed to pieces the ruling by the court of the first instance, showing that it was unlawful and baseless. Our opponents, represented by the Ministry of Justice of Ukraine (MinJust) and the Security Service of Ukraine (SBU) failed in its suit, its written answers to the PSPU’s Appellate Complaint, and its oral arguments before the Supreme Court, to refute a single legal substantiation of the invalidity of their accusations against our party.

The Supreme Court’s 27 September decision was handed down by a panel of judges chaired by S. Ukhanenko, in whom the PSPU, during the court session, officially presented grounds for no-confidence and for a transfer of the case to the full Court.

The decision to ban the PSPU was political and discriminatory in nature, rather than juridical, because the motive for banning the Party was based on political accusations, not on any legal substantiation of violations of the Constitution of Ukraine or the European Convention on Human Rights by the PSPU.

I cite here one of the accusations by the MinJust, supported by the SBU, in their Statement of Claim: “The Party protests against Ukraine’s joining NATO and the EU, against the rehabilitation of OUN-UPA [Organization of Ukrainian Nationalists and Ukrainian Insurgent Army] fighters, declares fidelity to Eastern Slavic culture and canonical Orthodoxy, and envisions Ukraine in an inter-state union with Russia and Belarus.”

It is absolutely obvious to any honest human rights organization or any European jurist, that such politically motivated accusations as those, made by the Ukrainian government, are inadmissible as the basis for banning parties, under the Constitution of Ukraine (Art. 37), the European Convention on Human Rights (Art. 11, p. 2), European Court precedents, or the Venice Commission of the OSCE.

In the setting of the tragedy of the disintegration of the USSR, only the principles declared by the people of Ukraine—namely, a neutral, non-bloc status for the country; the impermissibility of the sale of land and the looting (in the form of privatization) of economic capacities belonging to the entire nation; equal rights for the citizens of Ukraine regardless of ethnicity, faith, language preference or cultural tradition; and Ukraine’s entry, on an equal footing, into a new inter-state union with the republics of the former USSR—offered a guarantee of peaceful coexistence with the former Soviet republics and the successful development of Ukraine as an independent, sovereign state. They provided Ukraine with territorial integrity within its 1991 borders and a guarantee of security from all leading countries in the world.

This explains the hatred of our party on the part of world imperialism and Ukrainian nationalism (fascism). They always fought against us, because we openly opposed the model of peripheral, colonial capitalism, imposed upon Ukraine by the IMF [International Monetary Fund], and we opposed privatization, the creation of an oligarchy, financial speculation, the cheap-labor model, capital flight, labor flight, the sale of land, the extermination of the Russian language and languages of ethnic minorities, the rewriting of history, debasement of the Soviet people’s victory in the Great Patriotic War, and making heroes of collaborationists from the OUN-UPA, and were against government agencies’ unleashing of terrorism against the canonical Orthodox Church.

I am proud of our Party and of every rank-and-file member, because we have been the only party in Ukraine to propose a scientifically based, comprehensive program of reforms for the country. I am certain that the implementation of our program would have prevented the current tragedy of the war, destruction of the economy, dying out of the population, and territorial losses.

Neither I, the leaders of our party organizations, nor the members of the PSPU ever called for a violent overthrow of the constitutional order or for violence of any sort. The goals and activity of our Party abided by all the norms and principles of democracy. Neither the MinJust nor the SBU offered a single piece of evidence to the contrary in court. We were prepared to achieve our goals through competition in elections. In the fight against us, however, terrorism, fakery, raider takeovers, slanders, and threats were employed.

The Party nominated me as a candidate for the Presidency of Ukraine four times—in 1999, 2004, 2009, and 2019. Those in power allowed me to take part in the elections only in 1999 and 2004. In 1999, when some of the attributes of democracy still remained in Ukraine, the power of our ideas and the population’s support of them were so great, that sociological polls forecast that I would defeat the incumbent President L. Kuchma in the second round.

But the terrorist attack on me, 2 October 1999 in Krivoy Rog, when two RGD-5 grenades were thrown at me and my entourage, was used by my opponents to frighten the voters, and I was deprived of victory. Victory was stolen from our Party through vote fraud in the parliamentary elections of 2002 and 2006. But popular support for the ideas and actions of the PSPU were very high at that time, because when we entered the Supreme Rada of Ukraine as a caucus in 1998, we had showed our fighting qualities, task-orientation, and commitment to principle. The members of our Party who were elected to local self-government bodies carried on the same kind of self-sacrificing fight.

I am grateful to every member of the PSPU, who fought in our ranks selflessly and with all their heart to save Ukraine and transform the world. I am also grateful to the millions of people who supported our sacred struggle by voting for us. A deep bow to you all!

The position of our Party was always an impediment to the ruling governments’ ability to loot the country, mercilessly exploit the population of Ukraine, and conduct domestic and foreign policies in the interests not of their own people, but of the West’s imperialists.

Under the Constitution of Ukraine, responsibility for peace and for the lives, dignity, and health of the citizens lies with the institutions of state power, headed by the President.

Failing to meet its responsibilities and engaging in detestable mind control, the government of Ukraine issued a piece of fakery in the form of the decision of the National Security and Defense Council (NSDC) of Ukraine dated 18 March 2022, implemented by the President of Ukraine with his Decree dated 19 March 2022, to suspend the activity of several parties in Ukraine, including ours. And in order to prevent us from defending our rights, freedoms, and legal interests in civil and administrative courts, the 8th Administrative Appeals Court of Lviv ruled on 20 May 2022 to freeze the PSPU’s bank account. This deprived us of the possibility of contesting in court, as untruthful, the NSDC’s decision, the Decree of the President of Ukraine, and the entire “evidence” base submitted to the court by the MinJust and the SBU.

In violation of Article 55 of the Constitution of Ukraine and Article 6 of the European Convention, we were deprived of access to the court, because of the impossibility for the PSPU to pay the court fee from its bank account. Our purpose would have been to refute, on the basis of our own lawsuits, the false information submitted by the MinJust and the SBU as the basis for banning the PSPU.

The blocking of our bank account also deprived the PSPU of the right to hire the services of a lawyer. Vladimir Marchenko and I were forced to conduct the entire, exhausting legal battle ourselves. He represented the interests of the PSPU before the Supreme Court.

In contrast, the Court deemed worthy as evidence fabrications from the Internet, submitted by the SBU, without any investigation of the primary sources or confirmation of their truthfulness. The Court also accepted, without evidence, some distorted fragments of interviews of N. Vitrenko and L. Shesler and the attribution to the PCPU of financing terrorists, propagandizing in favor of war, and justifying the actions of the Russian Federation.

The Supreme Court, in politically motivated discrimination against the PSPU, denied all 19 of the motions made by our Party, including the ones on access to evidence of the activity of the OUN-UPA; on confirmation of any violations of law on the part of the PSPU, established by the judges; on the illegality of the Decree of the President of Ukraine dated 19 March 2022; on asking the Constitutional Court for a determination of the constitutionality of that Decree; and others. Brought to light in court was the monstrous position of the MinJust and SBU, that Ukraine refuses to fulfill its obligations under the UN Charter (Article 25), and therefore to obey the UN Security Council resolution on the Minsk Accords. In addition, the refusal to adhere to the Charter and Judgment of the Nuremberg International Military Tribunal.

The Supreme Court undertook no investigation at all of whether the norms of law were legally applied by the Lviv court in banning the Party. The Court allowed Vladimir Marchenko only 20 minutes to present our case. It did not allow argument, citing the fact that the Court was considering the banning of the Party using a simplified procedure. Think about that: banning a party, with the institution of the party being a foundation of democracy in general and European democracy in particular, using a simplified procedure! Without proper investigation of the evidence or application of the norms of law!

It will be interesting to see what conclusion the Venice Commission draws regarding democracy in Ukraine, based on the example of the banning of the PSPU.

I am convinced that neither those in power in Ukraine, nor the Supreme Court, have succeeded in defeating our ideas or proving the illegality of our activity. Their ban on the Party is not the period at the end of a sentence, but a comma. History acquits us. The true guilty parties in the tragedy of the war will be named. Truth and justice will prevail.