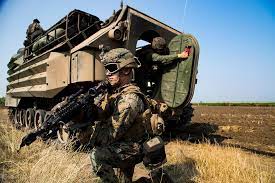 Apr. 6 (EIRNS) — Ukraine is not a member of NATO and therefore is not officially covered by Article 5 of the North Atlantic Treaty which defines an attack on one member as an attack on the alliance as a whole. NATO headquarters in Brussels nonetheless is tightening its relationship with Kiev. NATO’s Land Command, headquartered in Izmir, Turkey, announced on Twitter Monday, April 6, that it is adding Ukrainian representation to its staff. “DID YOU KNOW that Ukraine is the first partner nation to take part in the @NATO Response Force?” the headquarters said. “Ukraine is a valued partner of the Alliance & one of our six Enhanced Opportunity Partners. #LANDCOM currently has one Ukrainian officer serving in our headquarters.”

Also, US Air Force cargo planes have been spotted flying to and from Ukraine. UAWire reported yesterday that at least three US planes have been tracked flying into and landing in Ukraine, including a C-17 that landed in Lviv. According to a Ukrainian blogger, three flights were seen in the previous two days, one from the United States and two that took off from bases in Europe. While U.S. military transport aircraft are flying all over the world at any time, their presence in Ukraine is going to get more notice because of the current escalation of tensions with Russia. Questions will also be asked about what is the cargo they’re delivering.

These moves are made maximally dangerous by their having followed Joe Biden’s provocative “Crimea is Ukraine” public statement two weeks ago.

The Ukrainian side, meanwhile, is claiming the Russian military has relocated elements of the 76th Guards air assault division, based in Pskov, to Crimea. The 112 Ukraine TV channel cites an outfit called the Conflict Intelligence Team (CIT) claiming that it tracked these troops’ movement by rail all the way from Pskov to Simferopol. CIT’s main source is apparently video posted on TikTok, which they say showed military equipment being loaded at a train station in the Pskov Oblast.

In the Donbas, the Ukrainian army claimed this morning that two more of its soldiers had been killed, apparently by snipers from the separatist side. At the same time, the Donetsk militia claimed that Ukrainian mortar fire hit a residential neighborhood on the outskirts of Donetsk city, reported by the Donetsk News Agency. The clear implication of the report is that the mortar fire is a violation of last summer’s cease fire agreement.