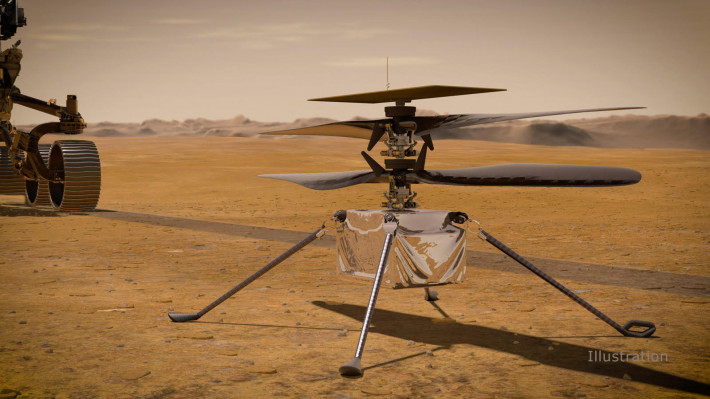 April 5 (EIRNS)–NASA was proud to announce that late on Saturday, April 3, the Perseverance rover successfully dropped the small helicopter Ingenuity four inches down to the surface of Mars where it will remain until April 11 when it is expected to take its first flight. The four-pound, solar-powered helicopter, had been attached to Perseverance’s “belly,” where it was kept warm by the rover’s nuclear-powered system, space.com reported April 4. Now that it is detached from Perseverance, the helicopter is using its internal battery to power its heater, to keep it warm through the frigid Martian nights. Bob Balaram, NASA’s chief engineer for the Mars Helicopter project, explained that the heater will protect key components “such as the battery and some of the sensitive electronics from harm at very cold temperatures.”

Ingenuity is designed to test technologies for future flying vehicles on other planets; it carries two cameras to document its flights, which the Perseverance rover will also observe. The data from its first flight on April 11 will reach NASA on April 12. Provided all goes well, Ingenuity will then perform several longer flights over Jezero Crater (where Perseverance landed) over the next 31 Martian days. Space.com reports that each flight should reach no higher than 16.5 feet, and will be conducted over a 300-foot-long (90 m) flight range.