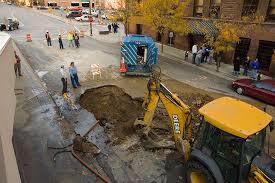 March 3 (EIRNS)—The American Society of Civil Engineers released its 2021 Infrastructure Report Card. Although the grade improved to a C-, up from a D+ in 2017, the investment gap—the funding required to get all infrastructure to a “B” rating—has grown from $2.1 trillion over ten years to $2.6 trillion over ten years. The ASCE estimates that continuing failures to invest adequately in infrastructure will cost $10 trillion in GDP over the next two decades, which is double the shortfall in spending over that time period!
These figures only include repairing current technologies of infrastructure. For example, you may be surprised to hear that the nation’s rail system got the highest infrastructure grade, B, despite the utter absence of high-speed rail. For a real mission to build U.S., and the world’s, infrastructure read and circulate EIR’s The LaRouche Plan to Reopen the U.S. Economy: The World Needs 1.5 Billion New, Productive Jobs starting with healthcare.