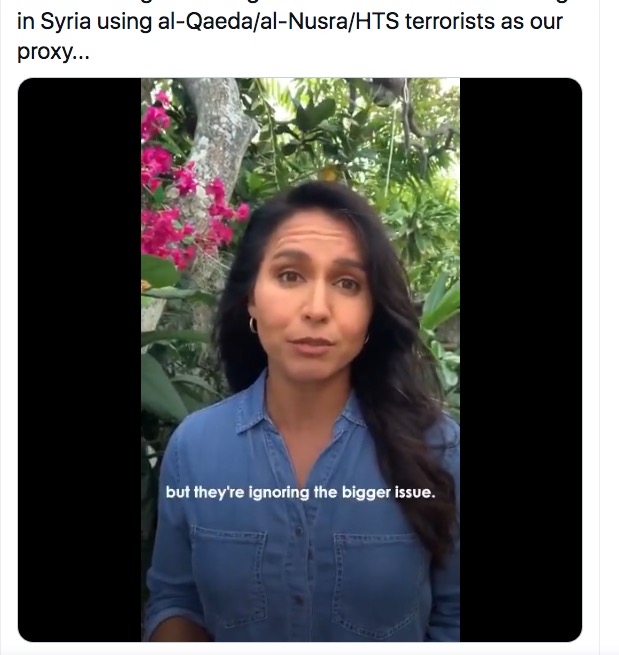 March 2, 2021 (EIRNS)—In a series of tweets on Feb. 28, former Democratic Congresswoman Tulsi Gabbard addressed the Biden administration’s unconstitutional airstrikes in Syria, but also addressed the broader issue of the U.S. regime-change war in Syria, carried out through an alliance with Al Qaeda, al-Nusra/HTS terrorists. This alliance, she warned, combined with draconian sanctions and embargoes, is “similar to what the Saudi-U.S. alliance did in Yemen.”

Her tweets are as follows:

“I’m glad some of my former colleagues in Congress are speaking out against the recent unconstitutional airstrikes in Syria—but they’re ignoring the bigger issue: the regime change war the U.S. continues to wage in Syria using al-Qaeda/al-Nusra/HTS terrorists as our proxy ground force, who now occupy and control the city of Idlib, imposing Sharia Law and ‘cleansing’ the area of most Christians & religious minorities.

“The Biden Administration continues to use the U.S. military to illegally occupy NE Syria to ‘take the oil’ as Trump so crassly but honestly put it, violating international law. A modern-day siege of draconian embargo/sanctions similar to what the Saudi-U.S. alliance employed in Yemen is causing death & suffering for millions of innocent Syrians depriving them of food, medicine, clean water, energy & warmth, and making it impossible for the Syrian people to try to rebuild their war-torn country.”