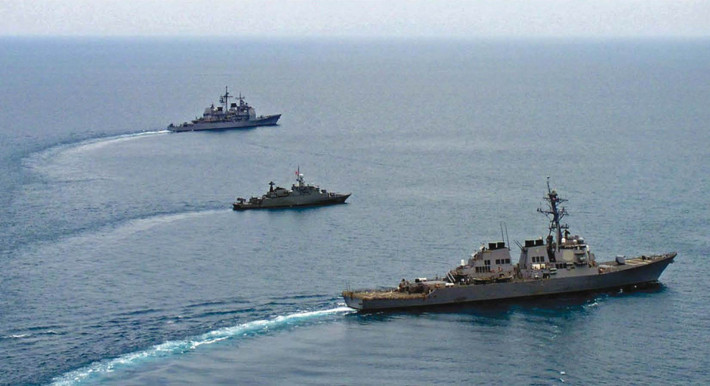 February 24, 2021by madeleine in General

Lyle Goldstein had never been afraid to “sail against the current” with regard to his vision of a sane U.S. defense policy, and it is hoped that his view is also shared by a number of U.S. defense intellectuals, who have some awareness of how the world is changing. In his latest article, entitled “The Indo-Pacific Strategy is a Recipe for Disaster,” Goldstein scores the malarkey dreamed up by U.S. policy planners based on the notion that the U.S. has now entered a period of intense rivalry with China and with Russia.

Goldstein goes back to a 1992 strategy document that asserted that the goal of U.S. policy was “to insure that no rival superpower is allowed to emerge” and to maintain the continuity of “the unipolar moment.” He also notes that the DoD declassified, long before it was normal, the U.S. Strategic Framework for the Indo-Paciific, which built on the same basic notion. “The authors of the Trump administration’s framework were evidently so pleased with the work that they thought it necessary to declassify it before leaving office and share it with the public, even though the general custom is to wait 30 years before declassification,” Goldstein writes. “But surely they also intended that the document might constrain and direct the Biden administration’s approach to U.S. strategy heads.”

“The strategy represents a fusion of neoconservative and neoliberal thinking and may satisfy large segments of the foreign policy elite, orchestrating the design for a new cold war—this time focusing on China,” Goldstein writes. And what are the problems that this strategy represents? While harping a lot on the “alliance of democracies”, the strategy is meant to include countries like Vietnam, Thailand, and Singapore, all of which fall into that category only with great effort. Even with South Korea and Japan, traditional U.S. allies, he argues, it will be difficult for them to follow in the wake of a U.S. man-of-war heading for China.

More serious, he notes, is the situation with changing the policy toward Taiwan. “The island has befuddled American strategists for decades and their clever solution has been ‘strategic ambiguity,’ balancing a general acceptance of China’s claim with a subtle hint of deterrence in the hope that the complex issue could be settled peacefully. The newly declassified strategy overtly codifies the deterrence aspect without even the slightest nod to Chinese claims—something acknowledged by American presidents going back to Franklin Roosevelt. The attempt to shift the policy during the Trump Administration put the U.S. on a clear collision course with China.

“Some Americans seem to welcome that possibility, but they are not well informed about the military balance and likely scenarios. The truth is that the United States could very well lose such a war, a fact admitted in early 2021 by a senior Air Force official, and there is no telling whether nuclear weapons would be used or not.”

And then there is India. Goldstein notes that India’s military potential is not what it is cracked up  to be and that any attempt to promote trouble on the India-China border could lead to a disaster for India similar to that in 1962. And promoting an Indian presence in the South China Sea, he notes, has already led to a major Chinese naval build-up. He also notes the folly for India in pushing a major military build-up with so much of its domestic needs crying for attention.

“In the end,” Goldstein writes, “the Indo-Pacific framework proved long on rhetoric and ideology, but failed to grapple seriously with the underlying changes in the regional balance of power that must occasion a new U.S. strategy based on realism and restraint. The Biden administration should not overlook the former strategy’s foundational weaknesses. The new team would be wise to junk the old strategy and start fresh.”

Good advice from a defense scholar with great experience. Goldstein set up the China Maritime Studies Institute at the U.S. Naval War College. But his article was published in a lesser known internet site, the “lawfareblog.” It is hoped that it will be transmitted further. For although Lyle Goldstein may be a lone voice, in a cacophony of disparate—and mostly outlandish—voices, it does remain the voice of reason, and therefore deserves to be heard.