First American ‘Splash-down’ Since the Era of Apollo Missions 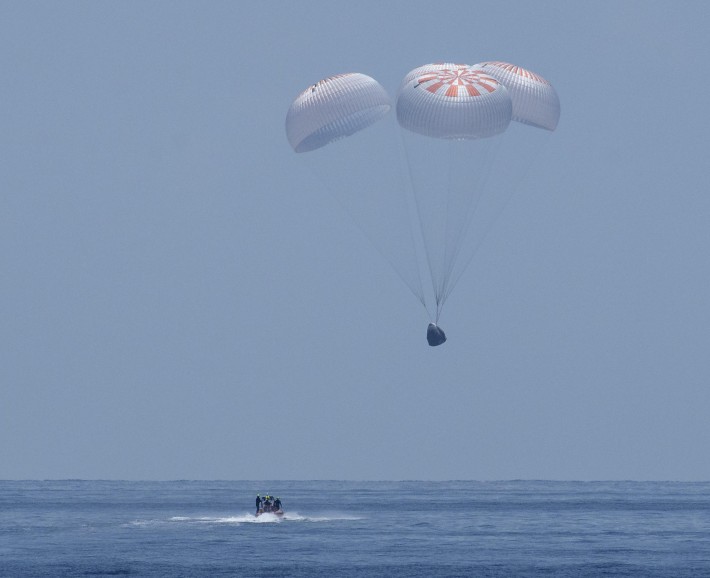 First American ‘Splash-down’ Since the Era of Apollo Missions

Today, the SpaceX Crew Dragon Endeavor flawlessly brought the two astronauts Robert “Bob” Behnken and Douglas “Doug” Hurley safely back home to Earth. In a remarkable series of maneuvers, the craft autonomously positioned itself for the correct orbit for splashdown. This was the first American splashdown in nearly 50 years!

As Dragon prepared to re-enter Earth’s orbit, it first executed the separation of the claw and trunk (on the lower portion of the craft), which were jettisoned away from the spacecraft. Thrusters at the forward point of the craft to decelerate it, burned for 11 minutes, the longest burn ever.

When completed, the cap for the capsule closed back over the thrusters, and began to maneuver about 90 degrees, such that the broadest portion of the capsule would shield the crew from the 3500 F degree heat, generated by the speed and friction with Earth’s atmosphere.

During this time, there was an expected six-minute blackout, due to the plasma generated by the heat of the descent on the outside of the spacecraft.

As it came out of the blackout, the drogue parachute was deployed first, to further slow its descent, and then the four main parachutes deployed, with a splashdown speed of 15 mph, near the coast of Pensacola, Florida, right on time. During the descent, a specially-equipped WB-57 airplane provided the first infrared images of the spacecraft.

Coverage on [spaceflightnow.com] included the commentators fielding numerous questions from the public via Twitter, featuring many questions on the mechanics of the descent, what the astronauts would experience, etc. and a question from a seven-year old asking why the capsule was shaped the way it was (cone-shaped).

This exciting first step for America’s return to manned missions to space demonstrates that the dream is very much alive, and enthusiastically received by the American people.

Dragon Endeavor now heads to weeks of post-flight inspection and testing, in order to complete the certification of the Dragon system to fly operational missions for NASA’s Commercial Crew and International Space Station Programs. If all goes as planned, the SpaceX Dragon’s first operational mission, Crew-1, will head to the ISS by late September, with three NASA astronauts and a Japanese Aerospace Exploration Agency (JAXA) mission specialist aboard.