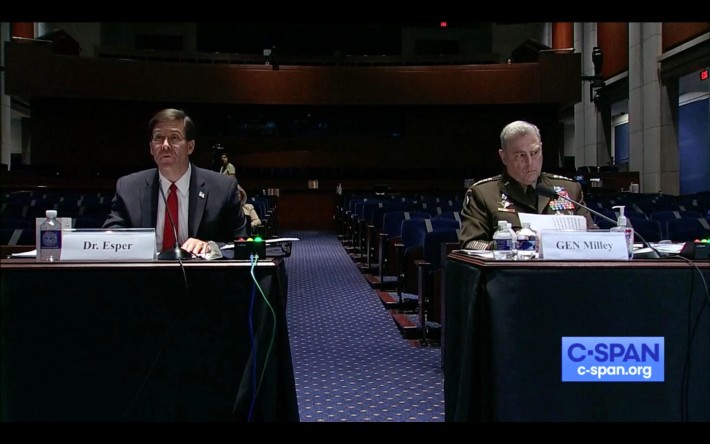 July 12, 2020by Jenny Burns in General
Secretary of Defense Mark Esper and Chairman of the Joint Chiefs of Staff Gen. Mark Milley, appearing before the House Armed Services Committee Thursday, were bombarded with questions about the so-called bounty-gate affair, in which Russian military intelligence was claimed to have paid bounties to the Taliban to kill U.S. troops in Afghanistan. While both men vowed to protect American troops, Esper saved his most impassioned words to rail against leaks to the media. “We are aggressively pursuing leaks within the Defense Department,” he said. “I”ve launched an investigation that is under way to go after leaks, whether it”s of classified information or unclassified information that is sensitive, and also unauthorized discussions with the media. All those things, again, hurt our nation’s security. They undermine our troops, their safety. They affect our relations with other countries. They undermine our national policy. It’s bad.”

As for the alleged intelligence, Esper said “To the best of my recollection, I have not received a briefing that included the word `bounty.’” Esper was then asked where the intelligence on Russian bounties came from, to which he replied: “It was not produced by a DoD intelligence agency.” Later in the hearing, Esper said [https://thehill.com/policy/defense/506641-top-general-vows-to-get-to-the-bottom-of-russia-bounty-intel] that he was briefed on intelligence about “payments” to militants. Esper said he was first made aware of the intelligence at issue in February. Gen. Frank McKenzie, commander of U.S. Central Command, and Gen. Scott Miller, the top U.S. general in Afghanistan, were aware as early as January, Esper said, adding “neither thought the reports were credible as they dug into them.”


Milley, for his part, vowed to “get to the bottom” of the alleged intelligence reporting and pledged his “1000 percent commitment” to sufficiently protecting U.S. forces. Milley later called the bounties a “unique, discrete piece of information that is not corroborated,” but said Pentagon officials “are taking it serious, we’re going to get to the bottom of it, we”re going to find out if in fact it’s true, and if it is true, we will take action.”