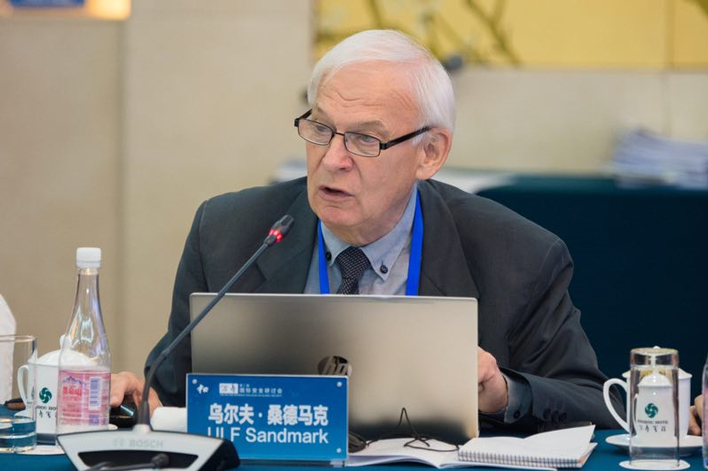 Because of the disorder in international relations many new formats for discussion and dialogue are developed to figure out what to do about the dangerous world security situation. The Wanshou Dialogue for Global Security was started last year by the Chinese People’s Association for Peace and Disarmament, which is an organization founded in 1985 and is by far the largest civil society organization in China dedicated to Peace. It has a membership of 25 mass organizations in China and maintains contact with 350 international peace organization and institutes for strategic studies.

The Wanshou Dialogue is organized in coordination with the International Department of the Communist Party of China Central Committee whose Minister Song Tao and Vice Minister Wang Yajun were the highest Chinese representatives in the Dialogue. There were 27 International guests and 23 Chinese participants in the Dialogue which had the form a closed round table discussion.

The opportunity to participate in this very prestigious conference about Global Security came out of the blue, as a side effect of the activities of the Swedish Schiller Institute to promote BRI in Sweden. It was a great opportunity to meet and become friends with leaders of top Think Tanks in many important countries. Only a few of them had met or knew of the International Schiller Institute on other occasions. 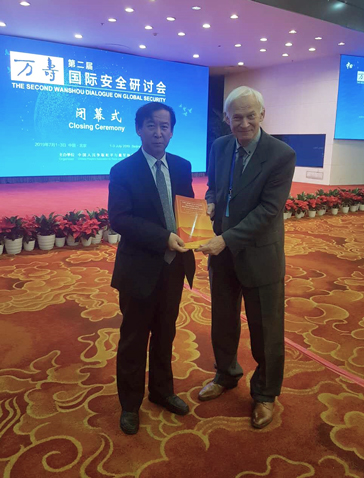 Ulf Sandmark presents the Schiller Institute’s report, The New Silk Road Becomes the World Landbridge II to Yu Hongjun, Vice-President of the Chinese people´s Association for Peace and Disarmament and Former Vice-Minister of the International Department of the CPC Central Committee

The Schiller Institute expertise was called upon to contribute to the Panel 3 about “Emerging and New Technologies and Global Security.” Among those technologies are ABM, ASAT, UAV, Cyberwarfare and Artificial Intelligence. Here several speakers warned against the militarization of space and the plan from President Trump to unilaterally deploy space weapons. It was an opportunity to bring those technologies that could uplift the dialogue to a level where the Common Aims of Mankind would show the way out of the disastrous global security dilemmas.

Lyndon LaRouche’s Strategic Defense Initiative and the Strategic Defense of Earth were the obvious starting points for this intervention by the Schiller Institute and then also Space Exploration and Fusion Power development that would make it possible for a policy of Global Raw Materials Security. Also, the Chinese Belt & Road Initiative was brought in from the physical economic standpoint of developing a new infrastructure platform as a new international logistics machine. This made it possible to link up the development of the economy as a stabilizer of the Global Security and to bring in the Four Laws of LaRouche as the absolute strategic necessity to be implemented through a Four Powers agreement for a New Bretton Woods.

The Russia-India-China cooperation was brought into the Dialogue by a Russian scholar as the s.c. RIC-format (as in BRICS). Also, at the G20 meeting President Trump had had meetings individually with the other three leaders who also had their special RIC meeting on their own. These developments opened up for launching the Four Power proposal at the Wanshou Dialogue, which is to ask President Trump to join the leaders of the RIC Powers to form a group strong enough to challenge the currently dominating financial power of London and Wall Street which under its leadership of the modern form of the British empire is the force behind the disastrous policy geopolitical wars bringing the world to brink of nuclear war. Finally, the necessity for the immediate global security to bring into the international strategic discussion these strategic proposals by Lyndon LaRouche, made the call for his exoneration appropriate to bring into the 2nd Wanshou Dialogue.

This ten minute presentation was well received. Another participant responded about SDI in a very positive way and asked if the SDI negotiations could move out of the US – Russian format and also bring in other powers. Ulf Sandmark got the opportunity for a very short reply saying that the first step would be to immediately start the process for implementing the SDE, as it it is civilian and can build trust. Secondly the SDI proposal should be studied and updated by all leading powers in the world. Thirdly a fully implementable counterproposal should be proposed to President Trump as an alternative to his proposal for a Space Force.

Sandmark said that SDI was developed by Lyndon LaRouche and further promoted by the Schiller Institute. If we as private institute could develop the SDI proposal, then any other institute, certainly leading national security organizations, would be able to fully develop the concepts necessary to bring forward the SDI as a solution to eliminate the danger of nuclear extinction.

Also, this intervention was received well. The Chinese chairman of the panel half jokingly introduced the need for an “SDF” – a Strategic Defense of Face. He took up the example of a recent video where the face of President Trump had been manipulated and put into a video saying that he was immediately attacking Iran. These types of videos, although false, could if they were spread, trigger a real war, the chairman said. This warning against the new technologies that could be used in this way, had the effect to further familiarize the conference with the concepts of SDI, which then became a reference point in the later discussions.

The 2nd Wanshou Dialogue brought up many other questions and concerns for evaluation among the participants and for sure will continue to be a platform for discussion about Peace and Development also in the future.