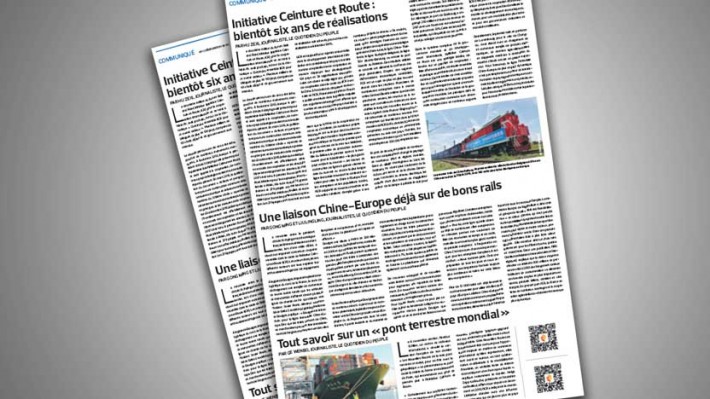 The major French dailies Le Figaro and Le Monde published a full-page paid supplement on the Belt and Road Initiative last week which includes three articles: a larger one entitled “BRI: Soon Six Years of Implementation”; a second one entitled “One China-Europe Link Is Already on a Good Track,” and one last article, about one fifth of the page, on the Schiller Institute’s book-length dossier “The New Silk Road Becomes the World Land-Bridge,” headlined “Everything You Want To Know about the ‘World Land-Bridge.'” The three articles are written by People’s Daily journalists.

The first two articles are full of updates on the ongoing great Silk Road projects; the third, on the Schiller Institute and its dossier, was written by Ge Wenbo, who has already several times covered our work in Africa.

The articles are a paid supplement, published in both papers. The articles are shorter in Le Monde, in particular on our dossier, which became a small box with the same title.  The translation follows:

“All You Need To Know about the ‘World Land-Bridge'”

“Last year, on Nov. 6, the Schiller Institute, an international think tank, published the French version of its dossier ‘The New Silk Road, a World Land-Bridge To Bring Geopolitics to an End.’ The presentation, which took place in the Paris 5th arrondissement municipality, recommends countries to take part in the Belt and Road Initiative.

“Contrary to the analysts on the other side of the Atlantic, often prisoners of the ‘geopolitical’ software in which the winner always wins to the detriment of the loser, we try to show here that a new win-win paradigm is not only possible but indispensable.  Whereas the New Silk Roads must be known because of the major opportunity they represent for international trade, above all they must be known, explains this dossier, as a multilateral alternative to financial globalization, a true leverage to restart growth and a chance for peace. Helga Zepp-LaRouche, president and founder of the Institute, affirms that since its launching in 2013, the BRI has shaped the world. The Chinese initiative will have a growing influence over more and more countries and improve the future.”

A photo of a container ship at berth accompanies the article with a following caption: “Container ship CSCL Star, with thousands of containers onboard, sailed from Shanghai and reached France’s port of Le Havre a month later. That port plays an important role in the implementation of the 21st Century Maritime Silk Road.”