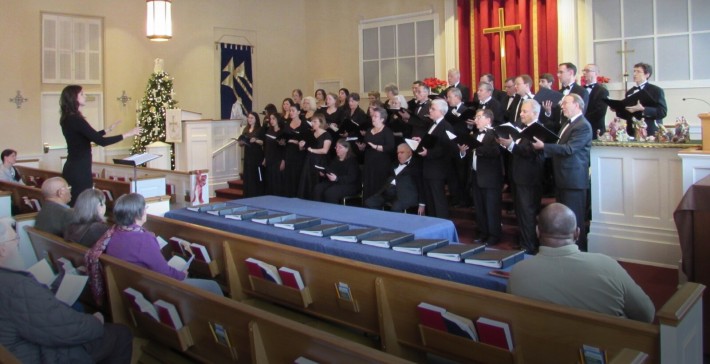 On January 1st, the Virginia Schiller Institute Community Chorus continued its tradition of ringing in the New Year with a concert of Classical music in Leesburg, VA. Megan Beets, director of the chorus, opened the concert quoting Friedrich Schiller, “Live with your century, but be not its creature; give to your contemporaries, but what they need, not what they praise…. Your own nobility will awaken theirs, and their unworthiness will not defeat your purpose.”  She challenged the audience with Schiller’s maxim that a beautiful culture is not an option, but that beauty and the beautiful character is a necessary condition for mankind. She also reminded the audience of the true context in which we welcome the new year, 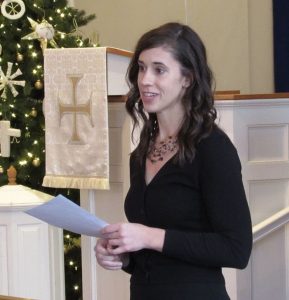 “…we are in a period of great change and transformation for all mankind. The old order of empire and war is collapsing as we speak, and new possibilities for the future of humanity are coming to the fore–for example, the fact that a little over 12 hours ago, a little space craft from planet Earth called “New Horizons”  flew by and gathered data from an an object in the farthest reaches of our solar system, over 4 billion miles away. Or that in the next day or two, a little spacecraft from planet Earth called “Chang’e 4”, launched by China, will attempt the first-ever landing on the far side of the Moon.”

With this introduction, the 90+ minute program began, a lively mix of offerings by the chorus and musician friends, including vocal and instrumental soloists. The chorus performed Spirituals, two pieces from Handel’s Messiah, and two “Glorias”—one a chorale from Bach’s Wachet Auf and the other from Beethoven’s Mass in C. Other offerings included Bach solo strings—one each for violin, viola, and cello; the first movement of Dvorak’s “American” string quartet; a Mozart trio from Cosi fan tutte; a trumpet air from a Bach cantata; and vocal solos including a Schumann lied, Russian folk songs, and Burleigh’s “Honor! Honor!”

The audience, 100 people (with roughly 50 musicians on top of that) was diverse mix of teachers, musicians, students, former local politicians, friends of the church, and others who had seen the concert advertised in shops and in newspapers. Attentive and engaged throughout the entire 90+ minute event, the general response from the audience was one of awe. Many attendees, coming to hear music, were struck by the directors opening remarks and how fitting they are for today’s times. “I can’t believe what I heard and saw, this was wonderful, I could hardly keep from crying!”, reported a local businesswoman and former federal government employee who came off a weekly paper ad. “Awesome! Such diverse talents! Diverse community too!” “Wonderful way to begin the year. Thank you so much!” 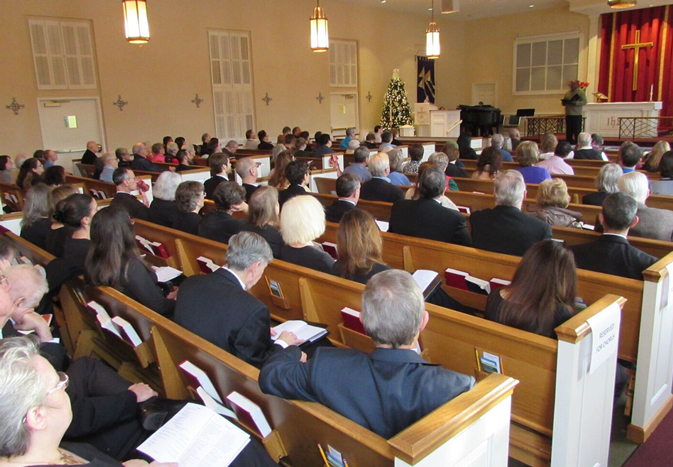 Several of the soloists who performed also reiterated their appreciation for the opportunity to work the Schiller Institute. One soloist, inspired by the Schiller Institute’s “top-down” approach to thinking about global events and culture, and moved by Michelle Fuchs’ two Russian pieces, decided she would also start working on Russian songs as a way to share their culture with Americans. Another soloist said, “I wouldn’t miss these concerts for anything, they have become very special to me.” And a third soloist, “I’ve been watching this group; the tone of it is improving every time I hear it, it’s getting pretty good.”

The reception afterwards was festive and celebratory, with audience members expressing their gratitude towards the Schiller chorus for uplifting their state of mind, and creating such a memorable cultural impact in their community.