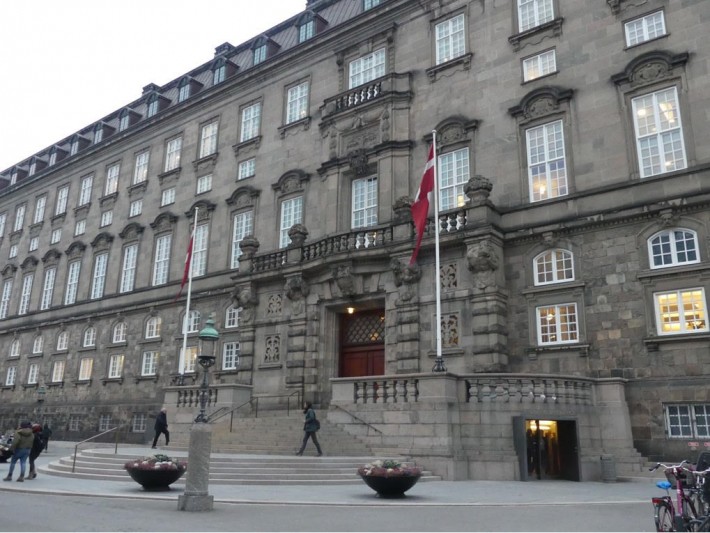 Thursday, November 22, 2018, Schiller Institute in Denmark chairman Tom Gillesberg, accompanied by a 4-person delegation, gave testimony before the Business Committee of the Danish parliament, Folketing. We requested the 15-minute testimony in the hope that the recent series of serious bank scandals to hit the country, would increase the openness to our proposals for what needs to be done to prevent a new financial crash.

In fact, the committee members were in shock after hearing the whistleblower in the Danske Bank (Danish Bank) money laundering case speak at a hearing on Monday.

Tom Gillesberg reminded the committee of our 2007 election campaign forecast before the last crisis, and the deregulation that caused it, our proposals for Glass Steagall and other measures afterwards which have not been heeded, and warned of the coming crisis. Tom then presented The Schiller Institute’s comprehensive solution consisting of 1. Join the New Silk Road; 2. Create a New Bretton Woods credit system, and; 3. Implement LaRouche’s Four Laws.

There were two committee members present, one from Venstre, a liberal party, and one Social Democrat. They both had supportive comments about our role in the Danish political process, and asked good questions.

While we were waiting to give our testimony, the foreign minister came by and received a copy of our testimony, as did the business minister, who had spoken to the committee just before us.

In fact, the committee had sent our testimony request letter to the Business Minister Rasmus Jarløv, and asked for his comment to The Schiller Institute’s proposal for Glass-Steagall bank separation. The minister first explained what Glass-Steagall was. Then he stated that the EU had discussed bank separation after the last crisis, and that in 2014, the commission had introduced a proposal to separate certain trading activities from normal activity, but that this proposal was withdrawn. This was discussed in Denmark, but because he said that trading activity was not the cause of the crisis in Denmark, it was not adopted. Denmark responded by increasing requirements for bank capital solidity, and instituted procedures for the resolution of troubled SIFI banks.

As supplementary material, The Schiller Institute submitted an article in Danish about Glass-Steagall, and the section “Without LaRouche’s Four Laws, financial crash means chaos,” from the new Silk Road report, which is now available on the parliament’s homepage. The business minister has also been asked to comment on this material.

Next Thursday, The Schiller Institute in Denmark is holding a seminar entitled, “The World After the U.S. Mid-term Elections: Glass-Steagall bank separation and a New Bretton Woods credit system can make the New Silk Road become the World Land-Bridge,” with a live-video presentation by Helga Zepp-LaRouche, a presentation by Hussein Askary, and a pre-recorded presentation by Paul Gallagher. 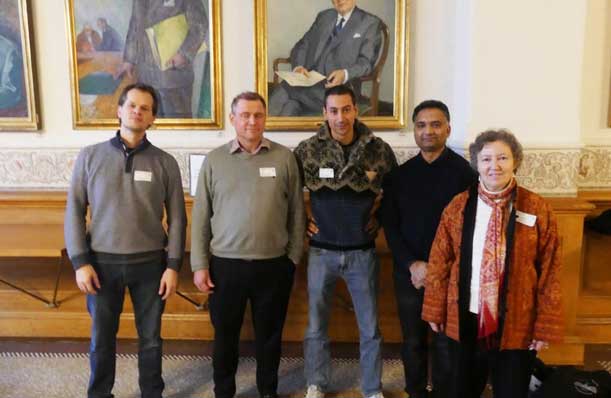 I am Tom Gillesberg, Chairman of the Schiller Institute in Denmark. Thank you for allowing us to come.

The Danish public has had a sudden awakening to the true state of the Danish financial world. For many years, Danske Bank (Danish Bank) has been deeply involved in money laundering, and both the bank’s management and the Danish Financial Supervisory Authority failed completely, after they became aware of the problem many years ago. It has also been revealed, that other major SIFI banks (Systematically Important Financial Institutions) in Denmark have colluded in tax evasion, and have failed in their fight against fraud and money laundering. Finally, many of the Danish banks, as well as their international colleagues, have contributed to the looting of the Danish and foreign treasury funds through fraudulent dividend tax rebates (also known as Cum-ex). All of this shows, that it is not a matter of individual problems, or individual bad apples, but is a systemic problem in which the entire banking and financial world is impregnated with uncontrolled greed, putting its own financial gain above the law, and the general welfare. The policy of deregulation, and allowing the financial world to control itself, has failed. This was actually already evident in connection with the meltdown of the international financial system in 2007-2008.

I, and other activists from the Schiller Institute, warned about this already in 2007, when I ran for parliament with the slogan: “After the financial crash – Maglev across the Kattegat” (here or a footnote: the body of water separating the island of Zealand, where Copenhagen is located, and Aarhus, Denmark’s second largest city on the Jutland peninsula). But our warnings were ignored. Then, after the crash in 2008 – where only a Danish government guarantee covering all financial institutions prevented a meltdown in the Danish banking world – when we suggested how to clean up the financial world through the implementation of Glass-Steagall bank separation, which would separate the wheat from the chaff in the process – separate normal banking activity, important to the society, from the casino economy – there was again an institutional refusal to listen, in Denmark, and the rest of the Western world. They would not put an end to the unhealthy behavior in the financial world that had created the collapse in 2008. If entire financial sector had not been deregulated, and Glass-Steagall banking separation abolished in the U.S. in 1999, we would have avoided the financial crisis.

But then, the focus was to save the banks, and all other players in the financial world, with bank packages and quantitative easing, at the expense of the real economy and the living standards of ordinary people. Therefore, today, we are facing a coming financial crisis, which is potentially far worse than the one we experienced in 2008. The Danish measures of letting banks and mortgage companies increase their capital solidity (with customers’ money), will not prevent a new crisis. Without a separation of the activities in the financial supermarkets, as in 2007-2008, we still have no fire doors that can prevent fire in a part of the financial world from spreading to the entire financial house.

There are many ticking bombs under the international financial system. In the wake of the U.S. Federal Reserve Bank’s rate hikes, there are more and more warnings about a coming meltdown of the $3.5 trillion sized U.S. corporate debt market, where more and more unsecured loans are being repackaged and resold in many different disguises – similar to the bad U.S. mortgage loans in 2007-2008. This has been accompanied by a fall in the stock markets, and a sharp fall in economic growth in the U.S. and Europe. The Bank for International Settlements warned of this dangerous development in its annual report in July, and the Bank of England did something similar in October. Then, the IMF’s explicit warning of falling corporate bond markets came in the IMF blog on November 12th.

A collapse of the mortgage debt market will have greater consequences than the collapse of the U.S. subprime loan bubble in 2008. Once the crisis is triggered, it will hit the banks around the world, and behind the polished surface, they have become even bigger, and even more bankrupt than they were in 2008. Like the upbeat to the 2007-2008 crisis, there has also been a collapse and capital flight from the so-called “emerging markets,” and the gigantic, unregulated market for financial derivatives can implode at any time.

There is no Band-aid solution that can fix this, but the Schiller Institute and the international LaRouche movement have proposed a coherent solution for how we can surgically remove the speculative cancer tumor, and create credit for productive investments, both internationally, and here Denmark.

1. We must join the New Silk Road

While most of the economy in the western world has been lagging for the last 10 years, and most people have experienced a falling standard of living, China has continued to experience strong economic growth, and has been able to lift more and more people out of poverty. The 2008 crisis was used to launch massive infrastructure projects, so China now has more kilometers of high-speed trains than the rest of the world combined. New towns, water projects, power stations and other infrastructure have been built, which make it possible to take care of a growing population, with an increasing standard of living.

In 2013, China’s President Xi Jinping launched this development policy on and international level with the Belt & Road Initiative, also known as The New Silk Road, which, today, is 12 times larger than the U.S. Marshall Plan after World War II, and over 60 countries are now participating. Denmark ought to be a prominent part of this development agenda, especially in Africa and South-West Asia.

On November 30, the G20 summit will occur in Argentina, and the Schiller Institute has suggested that the summits between President Trump, Xi Jinping and Putin be used to establish a new Bretton Woods credit system, in cooperation with India’s Prime Minister Modi. A new version of the old fixed-exchange system, established after World War II, but now, to create long-term credit for the development of all nations. This is the only thing that can prevent the ongoing disintegration of the current City of London and Wall Street-based financial system from leading to chaos and possible war.

In Denmark, we can now prepare measures that can protect our economy against the upcoming financial tsunami. The Schiller Institute has proposed Lyndon LaRouche’s Four Laws, a conceptual script to turn our economy away from financial speculation, and back to physical economy, and scientific and technological progress:

1. The enactment of Glass-Steagall bank separation of the Danish financial sector, where we clear out, and reorganize the banking system and divide normal banking activity from financial speculation. The financial supermarkets must be separated into normal banks, investment banks, mortgage business and insurance, each on its own. Banks and other financial institutions must be divided and reduced in size, so they no longer constitute a systemic risk, and the government deposit guarantee will only apply to normal banks;

2. We must create government credit for productive investment in the economy;

3. We must channel part of this credits into major infrastructure projects, and other things, that can increase productivity, and energy-flux-density in the economy, and create the next, higher economic platform for Denmark, such as a Kattegat bridge and a national maglev network, and fixed connections between Helsingør (Demark) and Helsingborg (Sweden), and under the Fehmarn Belt (to Germany).

4. We must invest heavily in research and  development of the areas that create future technologies, such as nuclear power, fusion energy, space research, etc. The biggest mistake we can make, is to believe that we can leave these questions to the financial world. It has proven that it has neither the moral compass, nor the necessary solutions, to ensure our future. Therefore, the state must now assume its responsibility, and establish the necessary laws and regulations that can safeguard the general welfare, and the future of Denmark, and the Danish people. In light of the recent bank scandals, there is a broad public backing for doing just that.