Visit our page for the tribute to JFK at the Cathedral of the Holy Cross in Boston from January 19, 2014 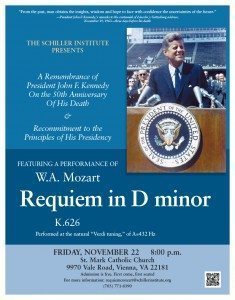 Text of the clips from selection of addresses by President John F. Kennedy, as the Interlude in the performance of Mozart’s Requiem

Now it is time to take longer strides–time for a great new American enterprise–time for this nation to take a clearly leading role in space achievement, which in many ways may hold the key to our future on earth…. [applause]

I therefore ask the Congress, above and beyond the increases I have earlier requested for space activities, to provide the funds which are needed to meet the following national goals:

First, I believe that this nation should commit itself to achieving the goal, before this decade is out, of landing a man on the moon and returning him safely to the earth. No single space project in this period will be more impressive to mankind, or more important for the long-range exploration of space; and none will be so difficult or expensive to accomplish. We propose to accelerate the development of the appropriate lunar space craft. We propose to develop alternate liquid and solid fuel boosters, much larger than any now being developed, until certain which is superior. We propose additional funds for other engine development and for unmanned explorations–explorations which are particularly important for one purpose which this nation will never overlook: the survival of the man who first makes this daring flight. …

Secondly, an additional 23 million dollars, together with 7 million dollars already available, will accelerate development of the Rover nuclear rocket. This gives promise of some day providing a means for even more exciting and ambitious exploration of space, perhaps beyond the moon, perhaps to the very end of the solar system itself. …

“This dam will produce enough electric energy, this one dam, to light the city of Edinburgh, in Scotland. This dam alone will supply enough irrigation area, larger than the nation of Luxembourg. This dam, and the rest of the dams on this river, which 30 years ago would have provided only floods, and darkness, now provide irrigation, and light. And though those of us who are here today, follow in the footsteps of those who made it possible, we share a satisfaction and also a commitment, that we must, in our time, make it easy for future Presidents of the United States, and future citizens, in the 1970s and ’80s, to visit projects like this, which had been planned and carried out in our day….”

“Every member of Congress, everyone in the Executive branch, from the President on, in the field of national resources, has to plan during their period of administration or of office, for the next generation. Because no project that we plan today will be beneficial to us. Anything we begin today, is for those who come after us, and just as those who began something years ago, make it possible for us to be here, I hope we’ll fulfill our responsibility to the next generation that’s going to follow us. ….

“This demonstrates our confidence in the future. … Those people who come here from abroad, what they want to see is the Tennessee Valley. Ten years from now they’ll want to see this project. And I hope in space and on the ground this country will continue its march forward.

“And the important lesson in all of those projects is that progress isn’t being made as a result of a sudden idea, suddenly coming into fruition. This project, the Fryingpan, Arkansas, and the project in South Dakota, represented, 10, 20, and 30 years effort of devoted citizens. Things do not happen, they are made to happen. And this project is the result, in our action today, of 30 years of men, some of whom have now died, who thought that this dam would help this valley…”

“If you realize what this State and other States like it went through in the 20 years from 1919 to 1939–the depression of the early twenties, the depression of 11 years, of the thirties, the stagnation on the farms and in the cities–and then realize how this State has boomed relative to the rest of the Nation in the last 5 or 10 years, we realize a good deal of this was due to the wise decisions taken in the thirties when the framework was laid with great opposition to those who objected to what was being done in Washington, great opposition to the efforts which Franklin Roosevelt and the Congress made in those days. And yet, when we look from 1945 to now, almost 20 years, we have had a gradual rising tide of prosperity throughout our entire country.

“Those two records–that contrast between what we saw then between the wars and what it meant to this State, and others like it, and what we have seen since 1945 should make, it seems to me, a deep impression upon those who seek to end a partnership between the National Government and this State and others which develop the resources of the State and improve the life of the people. …

“There is no strife, no prejudice, no national conflict in outer space as yet. Its hazards are hostile to us all. Its conquest deserves the best of all mankind, and its opportunity for peaceful cooperation may never come again. But why, some say, the moon? Why choose this as our goal? And they may well ask why climb the highest mountain. Why, 35 years ago, fly the Atlantic? Why does Rice play Texas?

“We choose to go to the moon. [applause] We choose to go to the moon in this decade and do the other things, not because they are easy, but because they are hard, because that goal will serve to organize and measure the best of our energies and skills, because that challenge is one that we are willing to accept, one we are unwilling to postpone, and one which we intend to win, and the others, too. [applause]

“I’m also glad to come here today, because we begin work on the largest nuclear power reactor for peaceful purposes in the world. And I take the greatest satisfaction of the United States being second to none. And I think it’s a good area where we should be first, and we are first. [applause] We are first.

“There are two points on conservation that have come home to me in the last 2 days. One is the necessity for us to protect what we already have, what nature gave to us, and use it well, not to waste water or land…. That is the traditional concept of conservation…. But the other part of conservation is the newer part, and that is to use science and technology to achieve significant breakthroughs as we are doing today, and in that way to conserve the resources which 10 or 20 or 30 years ago may have been wholly unknown. So we use nuclear power for peaceful purposes and power. …

“[W]e must maintain an aggressive program to use our hydro resources to the fullest. Every drop of water which goes to the ocean without being used for power or used to grow, or being made available on the widest possible basis is a waste, and I hope that we will do everything we can to make sure that nothing runs to the ocean unused and wasted….

“And secondly … we must hasten the development of low-cost atomic power. I think we should lead the world in this. … and by the end of this century this is going to be a tremendous source. Our experts estimate that half of all electric energy generated in the United States will come from nuclear sources….

“These are the things we must do, and many more. This great, rich country of ours has a long, unfinished agenda, but it has always had that agenda in creative times, and this is a creative time in our country and throughout the world. All of the trained and educated men and women who are making our country over, who are building a better standard of living for our people — this is a time when we wish to encourage that release of energy, human energy, which is the most extraordinary of all.

“This is a great national asset here. I can assure you it will be maintained….”

8) Oct. 22, 1963: Address at the Anniversary Convocation of the National Academy of Sciences, Washington, D.C.

“Man is still the master of his own fate, and I believe that the power of science and the responsibility of science have offered mankind a new opportunity not only for intellectual growth, but for moral discipline; not only for the acquisition of knowledge, but for the strengthening of our nerve and our will.

“We are bound to grope for a time as we grapple with problems without precedent in human history. But wisdom is the child of experience. In the years since man unlocked the power stored within the atom, the world has made progress, halting but effective, towards bringing that power under human control. The challenge, in short, may be our salvation. As we begin to master the destructive potentialities of modern science we move toward a new era in which science can fulfill its creative promise. …

“I recognize with each door that we unlock we see perhaps 10 doors that we never dreamed existed and, therefore, we have to keep working forward. …”

9) Oct. 26, 1963: Remarks at the groundbreaking for the Robert Frost Library at Amherst College, Amherst, Mass.

“The artist, however faithful to his personal vision of reality, becomes the last champion of the individual mind and sensibility against an intrusive society and an officious state. The great artist is thus a solitary figure. He has, as Frost said, a lover’s quarrel with the world. In pursuing his perceptions of reality, he must often sail against the currents of his time. This is not a popular role….

“If sometimes our great artists have been the most critical of our society, it is because their sensitivity and their concern for justice, which must motivate any true artist, makes him aware that our nation falls short of its highest potential. I see little of more importance to the future of our country and our civilization than full recognition of the place of the artist. ….

“[T]he highest duty of the writer, the composer, the artist is to remain true to himself and to let the chips fall where they may. In serving his vision of the truth, the artist best serves his nation. And the nation which disdains the mission of art invites the fate of … having ‘nothing to look backward to with pride, and nothing to look forward to with hope.'”