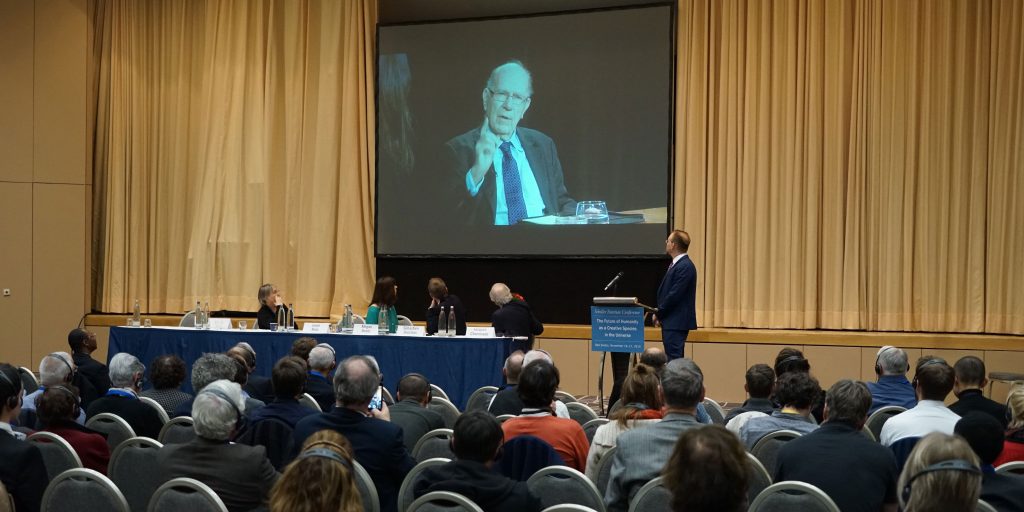 This Schiller Institute conference is dedicated to the memory of Lyndon LaRouche. His ideas, his economic method, and his optimistic outlook about the potentials of human creativity for the lasting existence of humanity in the universe, are more relevant than ever. Today, the New Silk Road, joined by more than 130 nations, is the first opportunity for developing countries to overcome poverty and underdevelopment and is the achievement of his vision of a new, more just, world economic order. The core of his program for a new Bretton Woods system, in which the world’s strongest nations must work together to replace the oligarchic system, was, from the beginning, the industrialization of Africa, Asia and Latin America — the realization of the solidarity-building World Land-Bridge.

Panel I — A Time of Strategic Upheaval: Will Europe Be Able to Help Shape the New Paradigm?

Helga Zepp-LaRouche, Chairwoman of the Schiller Institute: We can shape a new era of mankind!

Wang Weidong, Minister Counselor, Director of the Commerce and Trade Department at the Chinese Embassy in Germany, The potential of the New Silk road for Europe

Natalia Vitrenko, doctor of economic sciences, Leader of the Progressive Socialist Party of Ukraine, Former Member of Parliament, Ukraine, LaRouche’s Science of Physical Economy as the Key to Solving the Problems of the World, Eurasia, and Ukraine

Professor Andrei Ostrovskii, Deputy Director of the Institute of Far Eastern Studies of the Russian Academy of Sciences, Russia in the Chinese “One Belt One Road” initiative: Possibilities and prospects

Panel III — Who is Lyndon LaRouche?

Diogène Senny, President of the Panafrican League Umoja, In defense of African sovereignty

Josef Miklosko, Former vice Prime Minister of Czechoslovakia, The Frontier of Space: Fulfilling Mankind’s Destiny as Man in the Universe

Dennis Small, Coordinator for Latin America of the Schiller Institute: The Power of Reason: The Living Legacy of Lyndon LaRouche

Theo Mitchell, former State Senator of South Carolina, The man who should have been President of the United States

Nino Galloni, former director general of the Budget and Labor Ministries, Fatherland, Nation and State as seen by progressive Catholics and by Lyndon LaRouche

Harley Schlanger, Former spokesman for Lyndon LaRouche, Board Member of the Schiller Institute, Where Is America headed? The LaRouchian solution as the way out of chaos

Diane Sare, Director of the Manhattan Chorus Project, The Necessity of a classical Renaissance for the youth

Antonella Banaudi, Soprano and singing teacher, expert on Verdi tuning , LaRouche and the unity of art and science