COPENHAGEN, February 17, 2017 (EIRNS) — They came from around the world. They came bearing gifts. Not gifts you could touch with your hands. But gifts that touched your soul. Gifts of beautiful music, and beautiful dance.

The dialogue of cultures between the sponsors of the concert, itself, led to the great success – The Schiller Institute, The Russian-Danish Dialogue organization, The Russian House in Copenhagen, and the China Culture Center of the Chinese Embassy (about to open, which also provided intermission food). And the concert was held in The Russian Center for Science and Culture, representing the Federal agency for the Commonwealth of the Independent States (of the former Soviet Union), compatriots living abroad and the international humanitarian cooperation (Rossotrudichestvo). 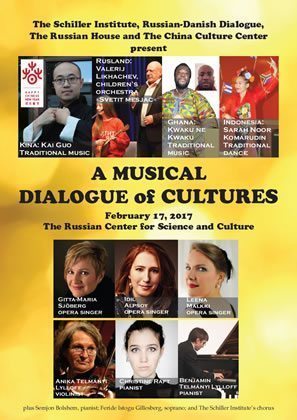 Firstly, the people were told by Schiller Institute chairman Tom Gillesberg that we have a unique moment in world history, where the potential is there for the U.S. to join the new paradigm of economic development sweeping the world. Secondly, they were told by the spokeswoman for Russian-Danish Dialogue, Jelena Nielsen, that a dialogue of culture can lead to peace in the world. They were also the interchanging hosts for the evening. Thirdly, the director of The Russian Center for Science and Culture, Artem Alexandrovich Markaryan, welcomed the people.

Then the procession of gift-givers began. 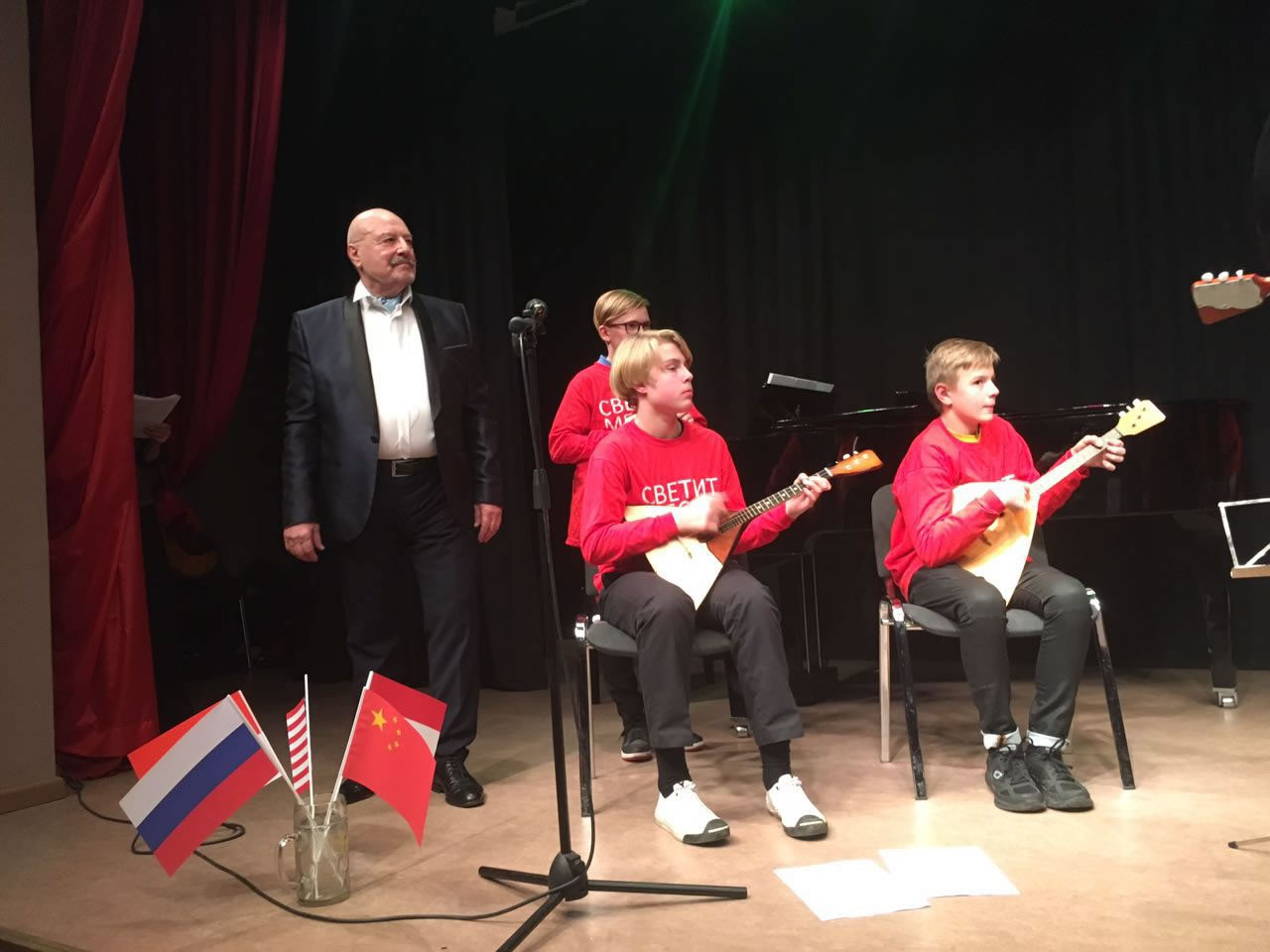 From Russia came children playing Russian folk songs on balalaikas, (the “Svetit Mesjac” (The Moon is Shining) ensemble from The Russian House, conducted by Igor Panich), including Katjusha, with soloist Valerij Likhachev (left), baritone, who has sung on 200 stages. He also later performed Leperello’s list aria, from the opera Don Giovanni by Mozart, and Mephistopheles’ couplets, from Gounod’s opera Faust, together with his pianist Semjon Bolshem.

From China’s Mongolia came a very musical young science student, Kai Guo, who played many flutes, and charmingly sang the Kangding Chinese love song, as a duet, with Feride Istogu Gillesberg from The Schiller Institute.

From Indonesia came a traditional dancer, Sarah Noor Komarudin, who filled the room with her graceful Jaipong dance.

From Ghana came two young men, Isaac Kwaku and Fred Kwaku, who sang and played a religious song, and a song about when we work together, we are stronger than when we stand alone. 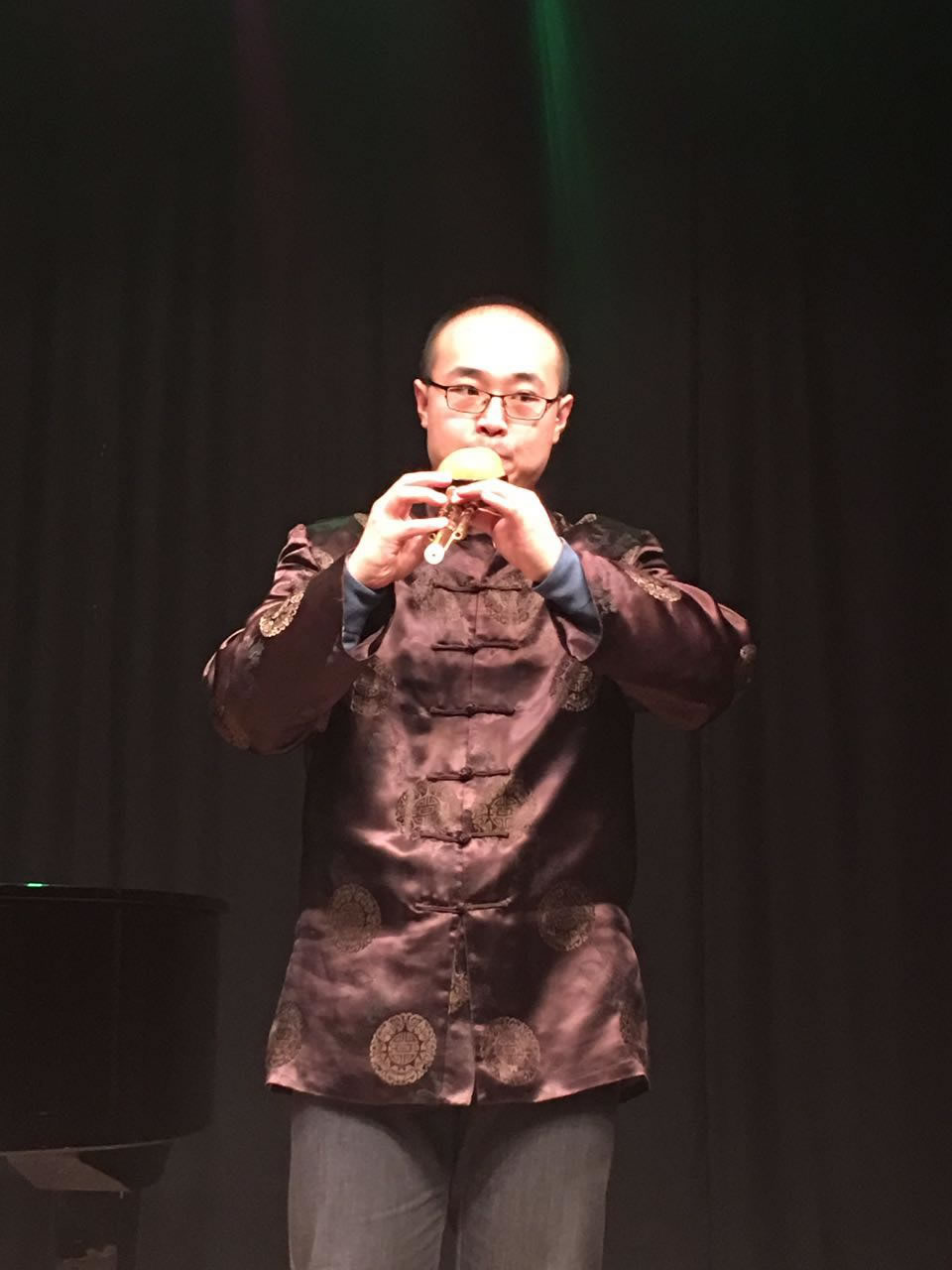 And from Denmark and Sweden came three outstanding female opera singers, whose tones, and dramatic intensity, moved the audience profoundly. Their offerings were songs and arias from Schubert, Verdi, Dvořák and Sibelius. Gitta-Maria Sjöberg, an international bright star of a soprano, who recently retired from The Royal Danish Opera, sang Rusalka’s Song to the Moon by Dvořák. Idil Alpsoy, a fantastic mezzo soprano with roots in Hungary and Turkey, who is also a member of the Middle East Peace Orchestra, sang songs from Sibelius’ Op.37 and 88. And a soprano, Leena Malkki, we have heard for many years blossoming into a truly magnificent artist, sang Schubert’s Gretchen am Spinnrade (spinning wheel), and Desdemona’s prayer Ave Maria, from Verdi’s opera Othello. The first two were accompanied by Christine Raft, an extremely talented young Danish pianist, and the later by The Schiller Institute’s own Benjamin Telmányi Lylloff.

He, and his mother Anika, poignantly played Beethoven’s Romance for violin and piano, continuing the legacy bequeathed by their ancestor from Hungary, the violin soloist Emil Telmányi Lylloff.

For the finale, all the singers (but one), sang Verdi’s chorus of the Hebrew slaves longing for freedom, Va, pensiero, with the addition of four members of The Schiller Institute’s future chorus. See the program at: www.schillerinstitut.dk/si/?p=17637 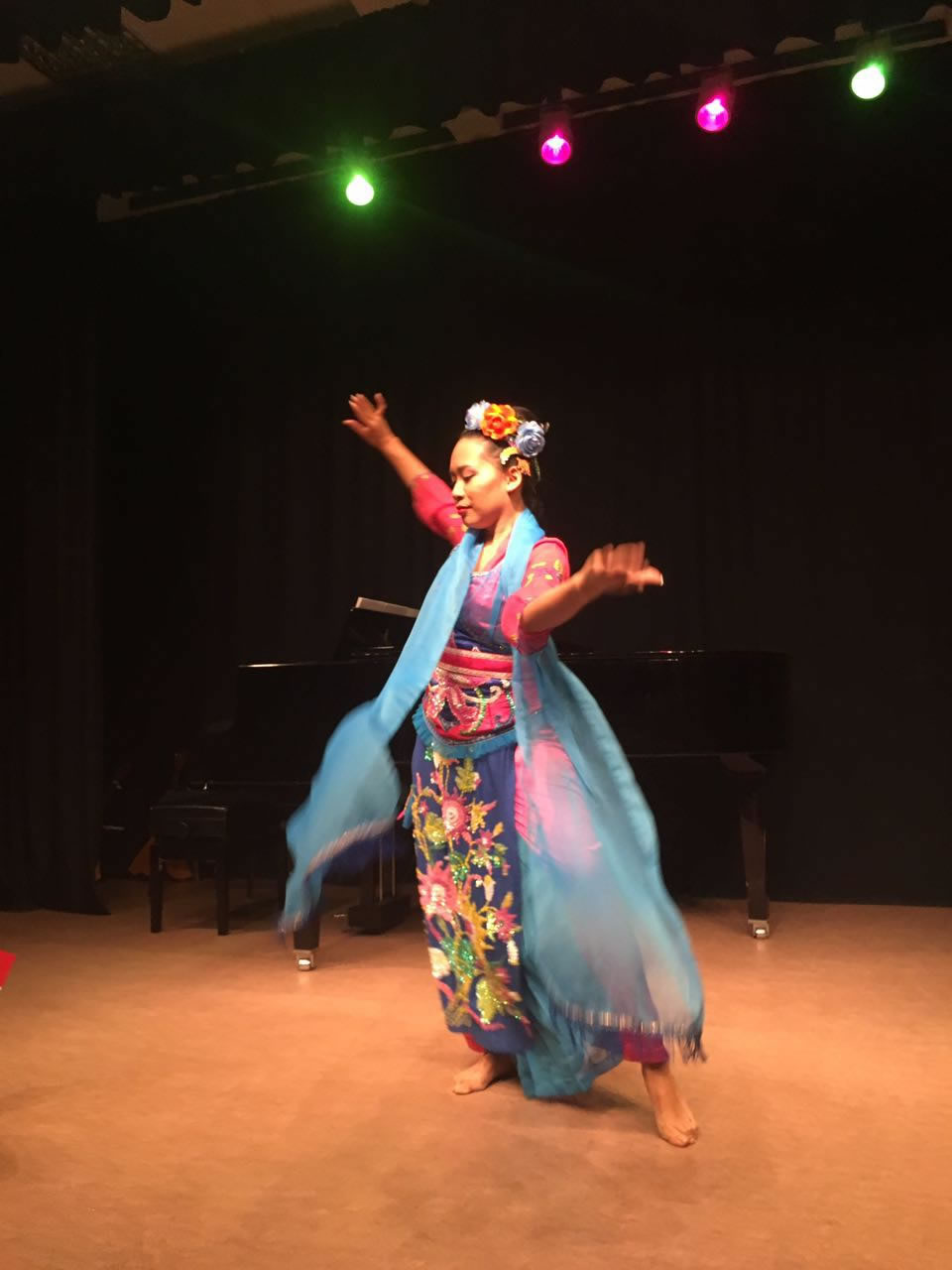 And the people were uplifted, with each presentation by itself, and with the succession of one piece of music, or dance, after the other, one country after another, traditional music in dialogue with classical music, weaving a tapestry of sound, sight and delight, not reaching their senses, but their soul.

And the people were asked to be in contact with us, and to consider joining The Schiller Institute’s chorus, some of whom wrote that they would. 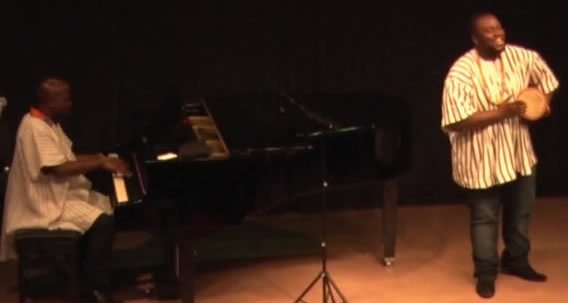 Fred Kwaku (piano) and Isaac Kwaku (singing, with a drum).

As they left, they all expressed the most sublime joy and thankfulness for having had the privilege to have received all of these precious gifts, which they took home in the memory of their minds, to be opened again, and again.

A musical testament to the paradox of the unity and diversity of mankind, expressed by human creativity, and a powerful statement of the dialogue of cultures was declaimed.

We will go forth with this statement, in the form of professional video and audio recordings, to spread its ripples throughout the world.