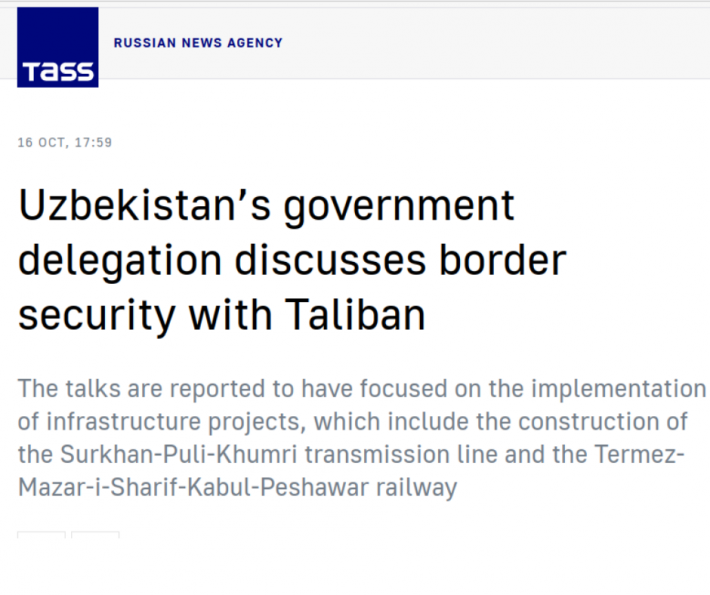 A delegation from Uzbekistan’s government, led by Investment and Foreign Trade Minister Sardor Umurzakov, met with the Afghan delegation led by Abdul Salam Hanafi, deputy prime minister of the Taliban’s provisional government in Termez (in the southern portion of Uzbekistan) on Oct. 16, for a one-day conference.

In a statement from Uzbekistan’s Foreign Ministry spokesman Yusup Kabulzhanov told TASS on Oct. 16: “‘At the meetings, representatives of a number of ministries and agencies discussed trade and economic cooperation, border security, cooperation in the fields of energy, international haulage and transit.’

“The talks are reported to have focused on the implementation of infrastructure projects, which include the construction of the Surkhan-Puli-Khumri transmission line and the Termez-Mazar-i-Sharif-Kabul-Peshawar railway,” TASS reported.

The Afghani English-language online daily 8AM also reported that “In the meeting, the two sides have appointed a joint technical team to provide instructions for the implementation of projects. After 10 days, the team is supposed to complete strategy and instructions on how to implement these projects and present them to the officials of both sides.”

Termez is becoming a hub for humanitarian aid. The UN High Commission on Refugees (UNHCR) said this week that three consignments of humanitarian aid would be airlifted to Termez in the near future before entering Afghanistan by truck.

Radio Free Europe reported that last month, Uzbek President Shavkat Mirziyoyev told the UN General Assembly that his country has resumed the supply of oil and electricity to Afghanistan. “It is impossible to isolate Afghanistan and leave it within the range of its problems,” RFE quoted him as saying.

In related news, AFP reported that acting Afghan Foreign Minister Amir Khan Muttaqi met in Ankara on Oct. 14 with Turkey Foreign Minister Mevlüt Cavusoglu: “Cavusoglu called on governments to unfreeze Afghanistan’s foreign accounts to ease the growing humanitarian crisis but said Turkey was not yet ready to recognize the group.”